Relatively little is known about Emily Brontë, the enigmatic author of Wuthering Heights.

That’s the jumping-off point for director Frances O’Connor’s new drama Emily, a speculative account about the author’s inspiration, her sibling relationships and her inner-spirit that judiciously mixes fact and fiction. The fictional element of the story primarily emerges through Emily’s relationship with local Haworth curate Weightman, a real-life figure who, as per the historical record, appeared to share a deeper connection with Emily’s sister, Anne.

A critical facet of the movie’s moody texture is the score by the noted Polish composer Abel Korzeniowski, no stranger to articulating the tormented inner feelings of creative souls. With his score for A Single Man (2010), the first of his two collaborations with writer-director Tom Ford, Korzeniowski honed the stately, enveloping sense of European, string-led classicism that has become his stock in trade. In that instance, the composer got beneath the skin of Colin Firth’s repressed 1960s English teacher, evoking a sense of melancholic beauty.

In 2016’s Nocturnal Animals, also directed by Ford, Korzeniowski built upon the elegant principles of A Single Man but infused them with a far greater sense of Bernard Herrmann-esque sense of propulsion and imminent violence. The power of the string section is designed to take us inside the head of Amy Adams’ tormented writer as she grapples with a vicious manuscript sent by her ex-husband, a toxic condemnation of their marriage. The vacillating tone of the strings, by turns sumptuously romantic and moody, cemented Korzeniowski’s style.

It is, therefore, unsurprising to discover that, in person, Korzeniowski strikes a decidedly sophisticated, urbane and eloquent tone. This is clearly the personality that he channels into his scores. Sharp of dress and poetic in his turn of phrase, the composer is a delight to talk to, and he’s typically effusive when discussing his work on Emily.

“Emily Brontë, in combination with Emma Mackey’s performance, creates such a vibrant portrayal,” Korzeniowski explains. “We couldn’t tell this story by having her solely constrained to her natural surroundings. The whole point is that Emily’s internal life and her imagination was so much larger than everything around her. Music was a natural way of allowing the audience to feel how wild she was inside. She was a nonconformist and ahead of her time.”

My inspiration is always what I see on the screen.

Other acclaimed works from Korzeniowski include the TV show Penny Dreadful with which Emily shares distinct Gothic overtones. That soundtrack struck a decidedly darker, more operatic tone, perhaps channelling the spirit of Wojciech Kilar’s work on Bram Stoker’s Dracula. A dramatic flipside is Korzeniowski’s celebrated soundtrack for Romeo and Juliet, which bears the hallmarks of Penny Dreadful’s orchestral set-up only filtered in a decidedly more tragic vein.

Emily is very much in the same mould as the composer’s earlier works, drawing on a rich well of character drama and translating it into a sumptuous arrangement for full orchestra. In his words, Emily Brontë is “full of conflict… someone who wasn’t born in the right period but is seeking the approval of her father”. He adds: “She felt the pain of being called ‘the strange one’ but couldn’t do anything about it.”

The score was recorded in Warsaw, and, by pure happenstance, Korzeniowski says he gained access to a “beautiful recording stage” that is usually in high demand for classical recordings. He explains: “It’s a beautiful concert hall but specifically built as an archival studio. It’s in the main studio complex, it’s big and it has beautiful acoustics. I dare to compare it to Abbey Road, which is the greatest room in the world. You feel the sound coming back to you. This room in Warsaw has a very similar feeling, spacious and accommodating of a large orchestra, but personal.”

Scoring for film brings a verification of the choices one makes as an artist.

“Our pianist was Szymon Nehring, who was a finalist in the International Chopin Competition 2021,” Korzeniowski explains. “We looked for a pianist for a long time. I wanted this very specific, velvety, beautifully classical touch. Someone either has it or they don’t have it. And Szymon just wowed all of us. We set him up on my left side in front of the orchestra. It was a true concert experience for everybody. It makes me proud of the sound.”

Fans of Penny Dreadful and Korzeniowski’s other scores will be delighted to hear that Emily is another thematically strong effort. Nehring’s piano is a mainstay throughout, binding the characters together through thick and thin.

“The first theme is the first cue that you hear in the film, for the opening credits,” he outlines. “You have the turbulent violin and it’s the first time you hear the church organs coming in. Then you have a theme which is essential for the whole structure. This occurs during Emily’s failed attempt to become a teacher in Brussels. There are many themes. There’s a group of cues that rely on the tingling, trembling, hovering sound of the entire orchestra. There are three or four cues following this idea including the scene of them taking drugs. You have the sharp notes on the violin and everything in the background over-saturates our senses.”

A cool idea that doesn’t work emotionally for the needs of the picture is the wrong choice.

The composer aimed to subvert expectations throughout his music. Despite the burgeoning relationship between Emily and Weightman (played by Oliver Jackson-Cohen), Korzeniowski believes that the “most romantic” element of the score rests on the familial scenes between Emily and her brother Branwell (Fionn Whitehead). “The scene where they speak through the laundry sheets,” he says, “is a beautiful, intimate moment of two spirits communicating. It’s incredibly poetic, delicate and poignant. It’s a beautiful balance to show Brontë in this context.”

In other areas, Korzeniowski says the music is designed to “speak volumes about the social structure”. In order to amplify the absurdity, he deploys a range of striking techniques including a “blaring, Handel-like chorale” section of music. In the composer’s words, the musical contrast shows how “people continued to live powerfully on the inside”, one of several examples of compositional irony in the score. 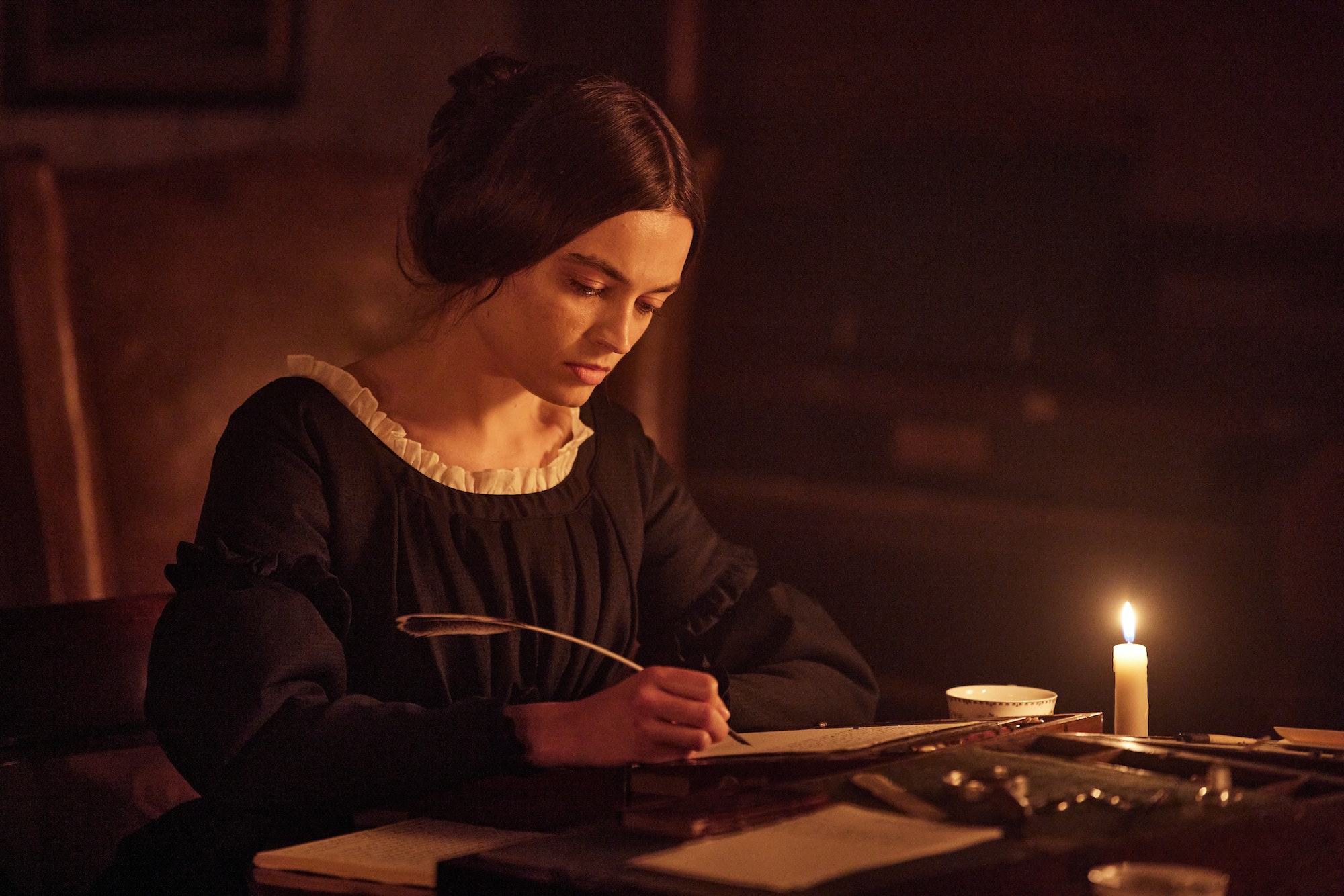 Korzeniowski is keen to stress the importance of the organ in the score. He explains that the instrument we hear in the movie is, in fact, a duo of newly released Spitfire Audio samples, which were integrated with the organic elements of the orchestral ensemble to intriguing effect. As the composer says, “the church organ is the one instrument that’s almost impossible to record for a film score, for logistical reasons like searching for the right church”.

“I wanted to play them back and record them again,” he says of the samples. “The room we ended up recording in was a real blessing for us. Not only was it a true concert hall and a full studio stage, but it also had a great speaker system, huge, full-range speakers built into the walls. We blasted the organ parts through those speakers and recorded them in the same room as our orchestral set-up. We worked to get the proper resonance in the room, the proper bass and everything. It has the same effect as recording the gran cassa [bass drum] in a small room.

Music was a natural way of allowing the audience to feel how wild Emily was inside.

“The re-amping technique in this room was the most amazing thing. You can hear the effect on the soundtrack when the low-end effect translates. You can really feel it. We achieved an almost perfect translation of the room in which the samples were recorded. We are talking about how a room can be used as an instrument.”

Fittingly enough, for an accomplished musician who composes in a bold array of colours, Korzeniowski expresses an enthusiasm for painting in his spare time. “This is my outlet,” he explains. “I don’t have to care if I’m any good! No one will give me any notes. I can do whatever I want.”

So, what does it mean for Korzeniowski to be a composer? Is the role bifurcated along the lines of classical composing and film score composing? When Korzeniowski is presented with that dichotomy (one that informed the late Jerry Goldsmith’s philosophy), he takes a moment to ponder his answer before returning with something typically magnanimous.

I feel like I am a film composer, first and foremost.

“I feel like I am a film composer, first and foremost,” he says. “If I hadn’t been born into a musical family, I would have been a visual artist. This is how I perceive the world. For me, writing music is like being part of the visual sphere. I’m the person who translates the visual cues into musical language. My inspiration is always what I see on the screen. I have a problem writing when the screen is off. To me, film music is something very precious. It straddles those two domains."

In my mind, film music speaks more directly and more exclusively to our emotional side. It relies much less on our rationality.

“At the same time, it’s a much faster education. In my mind, film music speaks more directly and more exclusively to our emotional side. It relies much less on our rationality. A cool idea that doesn’t work emotionally for the needs of the picture is the wrong choice. Film brings a verification of the choices one makes as an artist. I love that, personally. It gives a sense of solid accomplishment if I can see that the audience responds and approves.”

The Original Motion Picture Soundtrack for Emily is available now.