The only way to learn Indian classical music, really, is by listening to it – over and over, until the shapes of the ragas are absorbed into your marrow until expression becomes automatic. Arushi Jain is a singer, pianist, and modular synthesist with an unorthodox vision of that centuries-old tradition – one that’s electronic, for a start, and resolutely DIY. 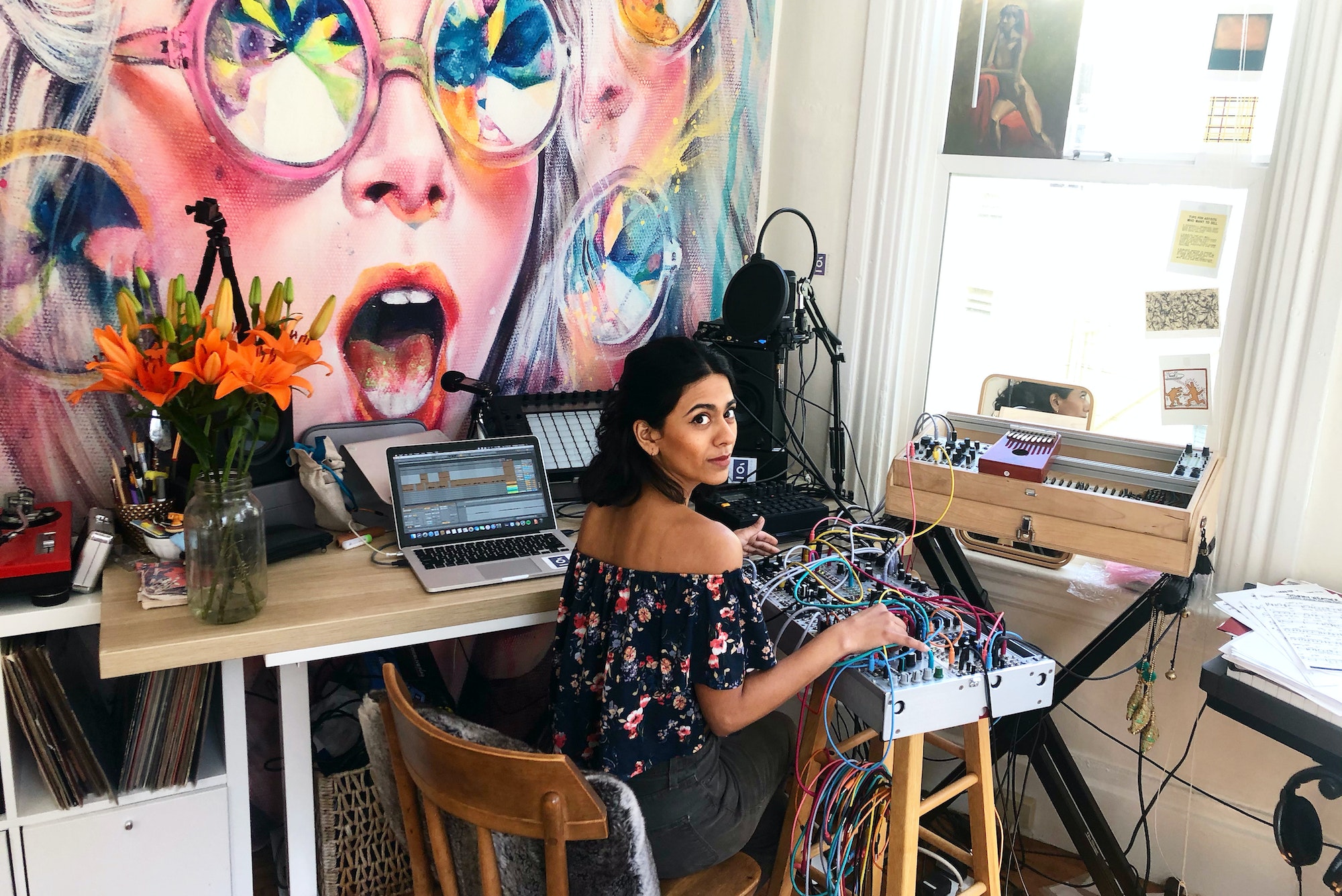 It’s not a simple task – for a start, she’s figuring it out on her own. An Indian classical performer would usually rely on a guru to mould them into a master, she says. “That's the person who teaches you everything. They tell you what you're allowed to listen to, what you're not allowed to listen to – they guide your whole journey.” But it’s been a long time since Jain left Delhi, along with her guru and her singing lessons. In the years since she’s been feeling her way into a sound that’s rooted in the colours and virtuosity of the Indian music she adores but brought to life via the visionary synthesiser tradition stretching from Suzanne Ciani to Kaitlyn Aurelia Smith.

Boxed in by a keyboard and a stack of modular gear, Jain explains that her music is shaped by her feeling of in-betweenness, a familiar sensation for uprooted folk who’ve been too long in the new country. “I spent my first 18 years in India and the last decade here. I’m in both places at the same time, but I'm in neither. I was going through a huge identity crisis a few years ago where I was like, where do I exist? Every time I go back to India I am different because I've lived abroad for so long.”

I was going through a huge identity crisis a few years ago where I was like, where do I exist?

The electronic music she’s made in the last few years (first under the name Modular Princess, then ose / ओस, and now simply as Arushi Jain) has been a way of processing this emotional dissonance. After a handful of releases on her own label Ghunghru, including 2019’s mind-voyaging album With & Without, Jain’s next LP is set for release on LA’s Leaving Records this spring, where it will sit alongside modern new age and blazed beats from artists like Laraaji, M. Geddes Gengras and label boss Matthewdavid.

As the title hints, under the lilac sky is an album of evening ragas; the songs are based on traditional melodic modes, or patterns, associated with that time of day and the moods it evokes (the word Raga, or Raag, actually means colour or dye). “But I can’t call it evening ragas! I'm afraid someone out there is going to be like, ‘That's not a Raag, it's not played like a traditional Raag,” she laughs. “What I would like to convey is that this is the unwinding of the day when it's getting darker. Not right before you're going to go to sleep because it's still energetic.”

Much of the album was composed for a sunset performance on the roof of Alsisar Mahal, a palace on the edge of the desert in Rajasthan and the site of the electronic music festival Magnetic Fields. But you wouldn’t need to know that to get a sense of the golden-hour magic that inspired these recordings; as Jain notes, “Indian classical music has the beautiful ability to pull you into a mood, even if you're not in that mood.”

Her modular rack is the beating heart of under the lilac sky, shimmering between her hypnotic, ornamented vocals and deep bass ripples which bring to mind Alice Coltrane’s ‘70s organ reveries. Coltrane – also known by her Sanskrit name Turiyasangitanada – was profoundly influenced by Hinduism and devotional music. The ecstatic kirtans recorded at the jazz musician’s California ashram feel like distant relations of Jain’s own culture-crossing style – meditative zones where past and present, east and west, technology and spirit all flow into each other

My music is very much based on Indian classical because honestly, that's the only music I know.

But Jain is still reluctant to situate her music in the Indian classical canon. “I'm not playing on a sitar, it's not delivered in the way that it's supposed to be delivered, right? It's in this new form that I'm just making up,” she explains, talking at speed in the way people do when they’ve had a good idea. “Even other musicians who are doing Indian classical music with electronics, they're still playing sitar or something, you know? I'm really breaking a lot of rules. At the same time, my music is very much based on Indian classical because honestly, that's the only music I know – I listen to Hindustani classical music every day, all the time.”

Jain started singing at eight years old, joining in with music lessons held for the many kids in her house – a building her family shared with her four uncle’s families. “I grew up with 15 kids in one house, nine of them girls. They have really beautiful voices. My mom also used to learn, so we had this guru come to the house and teach all of us in one go.” In high school Jain joined a programme at the Ravi Shankar Institute in Delhi, learning regional songs from India and some western classical pieces, even travelling to Austria to perform. But when she arrived in the US as a college freshman, she got “a huge culture shock”.

“I remember I auditioned for an acapella group and I sang in Hindi. They were like, can you sing in English? And I had no idea what to sing,” she remembers. “I think that in that moment I just shut off that part of me. I was like, I don't know how to do this here, I'm just gonna focus on my technical skills.” For three years, while knuckling down to her computer science degree, there was “no music in my life at all, and it had a really big impact on my mental health. I'd grown up really dedicated to singing. I ended up taking a year off from college because I was in such a messed up place.”

Stepping back from school gave her time to start singing again, but it came with its own confusion. Without a guru to guide her, Jain spent many hours trying to teach herself through books and records – but “this music cannot be learned that way,” she points out. “Someone has to be willing to listen to you and say that no, that's wrong, or yes, that's right, that was beautiful. I would do Skype lessons with people back home and try to learn, but nothing really stuck.”

In the meantime, she rerouted her programming brain towards electronic music. Returning to school, she signed up for the Laptop Orchestra class at CCRMA (a ground-breaking computer music facility at Stanford, whose alumni include AI explorer Holly Herndon) and discovered the world of sound synthesis. Her experiments with standard-issue synthesisers quickly fizzled; a brief encounter with a Korg Minilogue left her “super bored” by its preset sounds and limited functionality. “I just wanted to be able to route the circuit on my own,” she says. After noticing what some friends were doing on their modular synthesisers, the answer became obvious.

I hate reading manuals, I hate going through all of that – just give me the lowest layer possible.

Modular synthesis can be intimidating for anyone without a background in physics or electronics, but for a programmer like Jain, this under-the-hood approach makes sense. “My engineering background is that I work on infrastructure, so I get frustrated when there's a lot of abstractions I need to understand which other people have built or written. I hate reading manuals, I hate going through all of that – just give me the lowest layer possible,” she laughs. “I was instantly in love [with modular synthesis] because it fits the way I think.”

In 2020, Jain focused her attention on her craft, clocking up so many hours of piano practice that she ended up with carpal tunnel syndrome: “Every time I really get in the zone my hands start hurting and I have to stop for a few weeks and lose all that juice. It’s been one of my biggest frustrations in lockdown.” Her dedication to piano throws up another dilemma on her artistic journey – there just aren’t enough notes on the keyboard. “I'm trying to actively build a philosophy around what it means to play a classical Raga on piano because it's not an instrument that is meant for this music,” she explains. “I can't do a lot of the very iconic Indian classical things on the piano, like note bends. I went through this existential crisis where I was like, is this the right instrument for me? Maybe I should play the harp or something.” Frustrated by the limitations of a classical 12-note system – one that also dominates electronic music, with its reliance on traditional keyboard mapping – Jain is determined to get in between the notes eventually. “I don't do a lot with microtonality just yet,” she says, “but I'm not rushing myself. I'm going to be doing this for a long time.” 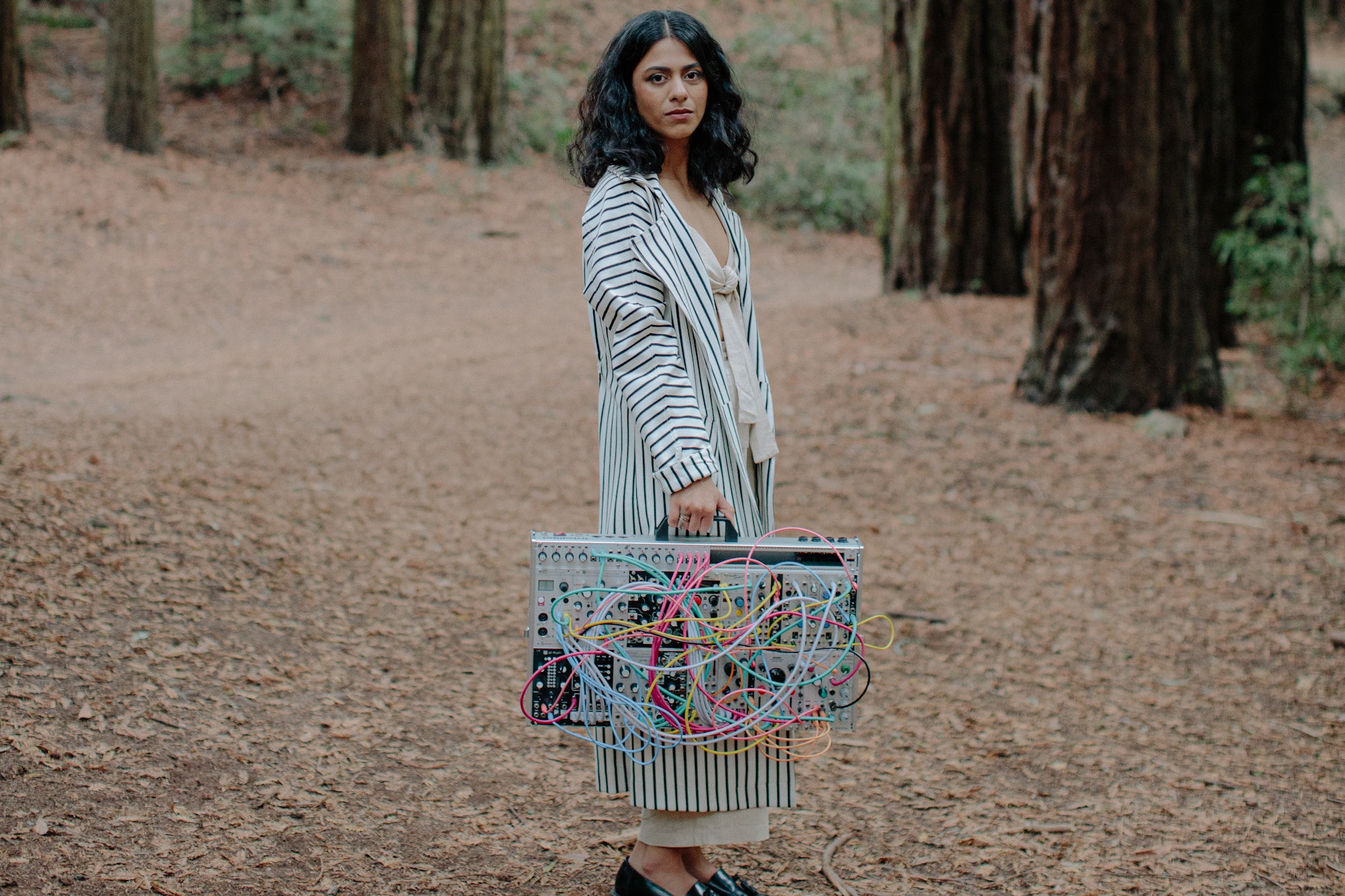 As well as the modular rack and electric piano, Jain uses an Electron Digitact to sample her voice for percussion patterns and unusual sounds. “I always introduce a layer of my voice, even if it's almost inaudible because one of my hypotheses is that your voice is the most unique thing you have. So in order for the music to be truly mine, my voice has to be in it.” She uses Ableton to program her modular system but often finds herself playing sequences out rather than using generative sequencers or pasting loops together. Vocals usually come right at the end of the chain, in a composition process that feels automatic, or even somatic. “My body just knows how to do it because I've been doing it for so long. I don't have to think, I listen to something and I harmonize with it. So instead of having everything fit my voice, I can make my voice fit everything else.” Perhaps unusually for a modular synthesist, she tries to resist the lure of new toys. It’s easy to end up thinking that you “need more to do more,” she says. “Actually I don't need a lot to write beautiful music.”

With under the lilac sky arriving in May, Jain is now getting back to work on “the most political piece I’ve written,” a soundtrack for a dance performance about the female body. Devised with choreographer Carly Lave, Vessel is set to premiere this summer after being postponed in 2020. There are also the monthly rhythms of the Ghungru show on NTS Radio, a platform for Jain’s personal selections of traditional Indian music and head-massaging drones and synths, but the past year has given her plenty of time to think about what the next steps could entail. The best lack all conviction, as W. B. Yeats wrote, and Jain’s apprehension about how the album might be received speaks volumes. “I'm afraid of what people who understand the music will say about it, in some ways. Nervous, because it's such a departure from the original music. I think a part of me is afraid of being rejected because I just love the music,” she says, her eyes widening. “I have this attraction to it that is hard to explain.”