Given Eli Keszler’s artistic history and output, you might have thought it was inevitable that he wound up scoring pictures. As a young percussionist based in Boston with family ties to New York, Keszler had a rich upbringing from a cultural standpoint. He split time between the cities during the late '90s and early 2000s when their scenes were like super-feeder fertilizer for ambitious and curious artists. Appreciation of great twentieth-century cinema went with the territory.

"I was lucky because, in Boston, there were a number of pretty good repertory theatres that showed fantastic movies," recalls Keszler. "There was one in Brookline, where I grew up, and I went to tons of movies there because I had ways to get in for free. I would sometimes watch multiple movies a week."

These converging inspirations helped forge Eli Keszler into one of the more daring composers of free-form and experimental music of his generation, as well as a big film enthusiast. He speaks the language of someone seduced by the charms of the score, indebted to the impression film music made on his formative musical identity. He mentions composers like Morricone and Badalamenti, but Bernard Herrmann is really his main inspiration.

"The two scores that blew me away and woke me up to film scoring at a young age were Vertigo and Taxi Driver," reminisces Keszler. "Taxi Driver has everything I look for in a score. It's subtle. There's that use of brass that's supposed to be the midtown traffic. It's got this gritty '70s Manhattan feel to it and a sexy jazz thing that's seedy but also elegant. Herrmann is my holy grail of film composers, and the '70s was the golden era of film scoring for me...But I also love Elliot Goldenthal's score for Heat. That score has had a huge impact on my writing in terms of capturing this distant, removed, industrial feel through orchestral instruments and guitars. It feels like the heat in downtown LA. The nasty fumes...I don't know." 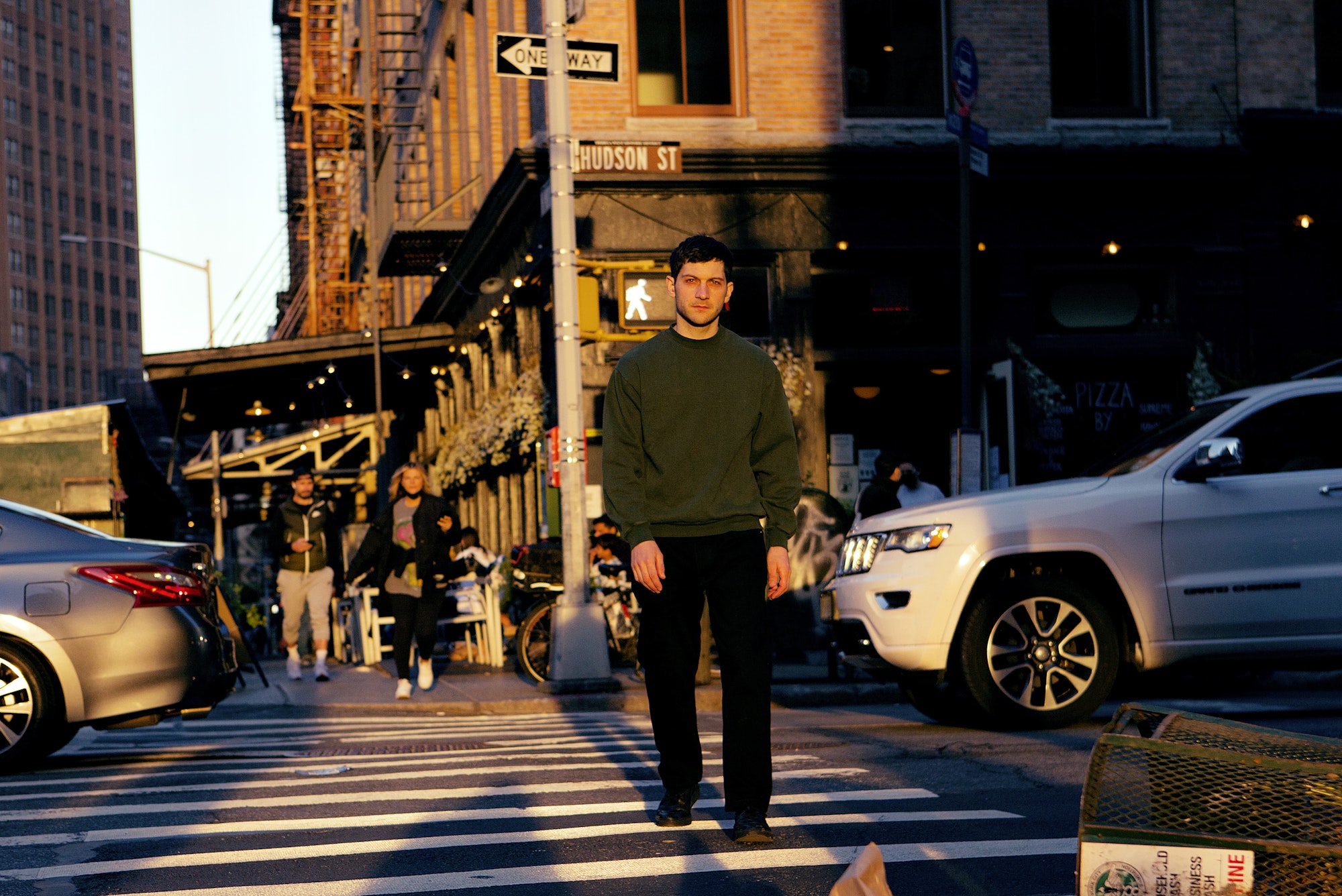 A prolific career as a composer of what can be loosely described as the neo-avant-garde has led Keszler to score his first film – the '70s-cinema styled, grainy horror-thriller, The Scary of Sixty-First, which won best first feature at this year's Berlin Film Festival. Upon the film's general release in the fall, the scoring community will welcome a new maverick, one whose origins stood him in good stead for his latest creative pursuit.

One of Keszler's close friends from back home in Boston is Daniel Lopatin – known and hailed in the modern music world as Oneohtrix Point Never and one of the exciting new composers for film in his own right [Good Time, Uncut Gems]. Keszler and Lopatin came up in the same underground scene, where the musical free-spirits congregated in basement and loft shows and the area bars.

The two scores that blew me away and woke me up to film scoring at a young age were Vertigo and Taxi Driver.

It was Lopatin that opened the door to Keszler's first experience in scoring. While completing his soundtrack for the Safdie brothers' Uncut Gems, he decided acoustic percussion was needed to pace two big cues: the beautifully meandering, eleven-minute opener "The Ballad of Howie Bling" and "Windows" – the cue with the most percussion in the score. Lopatin invited Keszler in to provide the organic pulse that was needed, and along with Co-Director Josh Safdie – also a musician and audiophile – the three worked in tandem to augment one of the more enchanting and exhilarating scores of recent memory.

"Dan and I have a long-term friendship and a shorthand in terms of references and stylistic decisions, so it was pretty easy in that way," says Keszler of his introduction to film composition. "I started working with Oneohtrix Point Never on [the 2018 album] Age Of. I think I'm the first person on any of his records to play an acoustic instrument. Dan works mostly with electronics, which is why he brought me onto Uncut Gems. When it comes to acoustic stuff, especially percussion, there really isn't a way to simulate the physicality, no matter how far technology goes."

Keszler's percussive gestures offered just the right measure to balance out Lopatin's electronic scapes on Uncut Gems. Not only was his creative relationship with Lopatin fortified in the process, but Keszler discovered that he was primed for the occasion. As an artist combining decisive vision and a thrill for sharing creative space, the dynamic of shaping music for film suited him. A big takeaway from his indoctrination reinforced a belief already held from past collaborations in performance.

"It's great to be with people who care about the details," Keszler explains. "If there was a part that called for a tambourine, I would pull out five different tambourines. It was a very deliberate process, and being around that kind of intensity and intention makes you rise to the occasion. The other main takeaway was that writing music for film involves more problem solving than writing abstract music. You can write a fifteen-minute piece, and no one in the world of music recording is going to say anything different. In film music, a cue is fifteen minutes and twenty-one seconds on the dot with a point at nine minutes that has to be accented with a dynamic curve and space left for dialogue. There are all these extra-musical factors that create a challenging and exciting constraint. I think artists work best under constraints. Film music offers that."

Keszler saw his experience on Uncut Gems as a foundation to pursue scoring on his own. Yet, the boundaries and constrictions of the medium seemingly run counter to the freedom of his musical style, especially when set within the spaces of the visual art installations that have frequently stood as a counterpart to his playing. This is a guy, after all, who ran cables from the Manhattan Bridge to the ground below and let the vibrations of passing trains create the organic industrial undercurrent to his performance. A natural question to ask is if the containment of a film narrative reigns in the inhibitions allowed to expand in the spheres he is used to. As an artist adding sound design to designed environments, Keszler reads the terrain to gauge what is needed. From his perspective, this is essentially what a score composer does:

"I realized pretty quickly that there isn't that big of a difference. When you walk into a space, you get a sense of where the walls and ceilings are and how it makes you feel. You're weighing all the elements and getting a gestalt reading of the room. To me, a film is exactly the same thing. You're drawn in by [what you see on screen]: The house, the trees, the lighting, and the characters. It's identical in that sense. In many of the installations I've done, it's been about exploring spaces, seeing what's inside them, and pulling something out of them. That's not so different from what you do with a script and a scene."

The Scary of Sixty-First is the directorial debut of Kesler's friend and fellow artist, Dasha Nekrasova, who referenced the salaciousness of the Jeffery Epstein scandal and twisted it into a provocative thriller. Perhaps as a method of couching this conceit, Nekrasova is deliberate in her stylistic embrace of '70s cinema, when nothing ever looked completely clean, and the hues were consistent with the tainted consciences of its characters. Present during Keszler's initial searches for a way into the appropriate sound, Nekrasova encouraged him to lean into the lewdness of that era and accent the imperfections. The film also carries a cheeky self-awareness of its touchstone, and It doesn't take itself too seriously, which allows for its devolution into the bizarre. In his treatments, Keszler explored aesthetics that brought him out of his normal tonal range, something he welcomes whenever it comes along, in any medium.

My music outside of scoring has a particular emotional tone that's pretty consistent.

"My music outside of scoring has a particular emotional tone that's pretty consistent. There isn't a lot of jumping around," says Keszler, frankly. "[Despite the subject matter], there's a lot of comedy in this movie and scenes that are light. That's not my music. I wanted abject humor built into the music that was also supposed to feel dirty. This film fits into a legacy of horror that was prominent in the '70s. The charm for me is that it has qualities that are rare in film today. It's unchecked and messy in a way that was very common back then. I wanted to connect to the synth scores of horror films in that era and also maintain an acoustic feel with various instruments. Dasha wanted a lot of dark ambiance running through, so I used bowing and rubbing techniques with percussion to get all these unusual effects. I wanted to create a foggy, chaotic feel in the score to achieve a sense of disorientation."

Consistent in Eli Keszler's music is the intention to disrupt the norms of structure and process and challenge expectation. This philosophy meshed with the brazen and risqué vision for The Scary of Sixty-First, revealing how the conceptual liberties embraced at this end of filmmaking call for open forms of musical slang like Keszler’s. In listening to his recently released solo album, Icons – and you're more so wandering into it than listening – cinematic instincts are awakened. It wouldn't be difficult to place its passages of ghostly jazz and echoed ambiance into a film that takes stylistic license. Some pieces on Icons sound like more abstract takes on something David Holmes might write for a Steven Soderbergh movie.

One way to interpret what's going on in Keszler's music is that there's a dialogue with what he lays out before him. It's as if he is reacting in real-time to the result of intention and the unintentional. It's a collision, combustion, interference, and the resulting reverberation from actions. Seeing his music as an internal dialogue, thoughts are tangled and untangled, sentences run-on, and rumination lingers. In the modern era of cinema, even in films that reference eras past, space is opening up for musical language of this nature. But being the film head that he is, Eli Keszler appreciates the credo his revered predecessors knew all too well.

"The story is first, and it's not about the music. Music isn't even about music in that sense. It's not about frills and doing big things; it's about creating something that affects people and communicates something. The film provides the framework, and within any framework that exists outside of a scene where there's either tons of dialogue or diegetic music, there's always space for musical color. I think horror and psychological movies offer the opportunity to place the kind of musical language I express. I have a specific range, but in many places in this film, inserting my personal musical vocabulary into a scene would have been crazy. Kind of sociopathic, actually...You have to go where the film goes."