Composer, sound designer, collaborator, and idiosyncratic electronic artist Hannah Peel is noting how remarkable her musical journey has been so far. It’s certainly been unique and hugely successful - from acclaimed scores for Game of Thrones and hit Channel 5 thriller, ‘The Deceived’, to collaborating with the likes of Paul Weller and, more recently, receiving a richly deserved Mercury Prize nomination for her latest solo record, ‘Fir Wave’.

Hannah seems slightly taken aback that her experimental, creative compositions and arrangements have encroached so far into the mainstream consciousness. But it’s a testament to her talent and sheer musicality that she’s succeeded across multiple different mediums. “It’s a brilliant, massive thing to be recognised with the Mercury Prize nomination,” she says. “To have an album that is self-released, an electronic piece of music inspired by a pioneer like Delia Derbyshire is amazing. She broke boundaries and hopefully, by retelling her music through this album, we’re breaking boundaries again.”

Born in Belfast as part of a musical family, Hannah moved to Barnsley when she was young before heading to Liverpool to join music college LIPA. The collaborative aspect of studying at the music school really set her up for plotting a path through the wider industry.

“LIPA was really great for networking, so meeting dancers and actors, working with engineers and set designers, just all of these peers form part of your musical life,” she says. Hannah studied various instruments before her musical career led her to score TV, film, theatre, dance projects as well as curating her own popular BBC 3 Radio show, ‘Night Tracks’. It is her latest album, ‘Fir Wave’, that has perhaps received the most praise, a record blending the worlds of nature and experimental music across seven beautifully atmospheric pieces.

I’ve always worked independently without the backing of a major label or pots of money. Everything has happened instinctively so it’s amazing for my music to have been acknowledged and recognised.

“It wasn’t supposed to be released,” she laughs when quizzed on its creation. “EMI Production came to me and said we own the rights to the KPM library music album ‘Electrosonic’ and if I would like to rework it. It was a record by Delia Derbyshire and various members of the BBC Radiophonic Workshop. But I wasn’t sure if I could do this. I feel very precious about her and her music.” She continues: “So instead I decided to take sounds and samples from this record from the seventies, then make my own instruments. I used the originals but transformed them by using this software called Kontakt.”

In Hannah’s re-interpretation, all that’s left are shadowy musical traces of the originals. With the help of producer TJ Allen, audio samples and snippets have been manipulated and stretched into something that pulses with completely new life. Released in March of this year, the sonic forms living inside the record have rung true with electronic music aficionados and critics alike. “When it came out, it just seemed to hit at the right moment,” states Hannah.

“I wanted it to emerge in spring as lockdown restrictions were easing. I wanted to make something with plenty of colour in it, that made you think about the ecological aspects of music too with enough space in it for listeners to come up with their own take on it.” 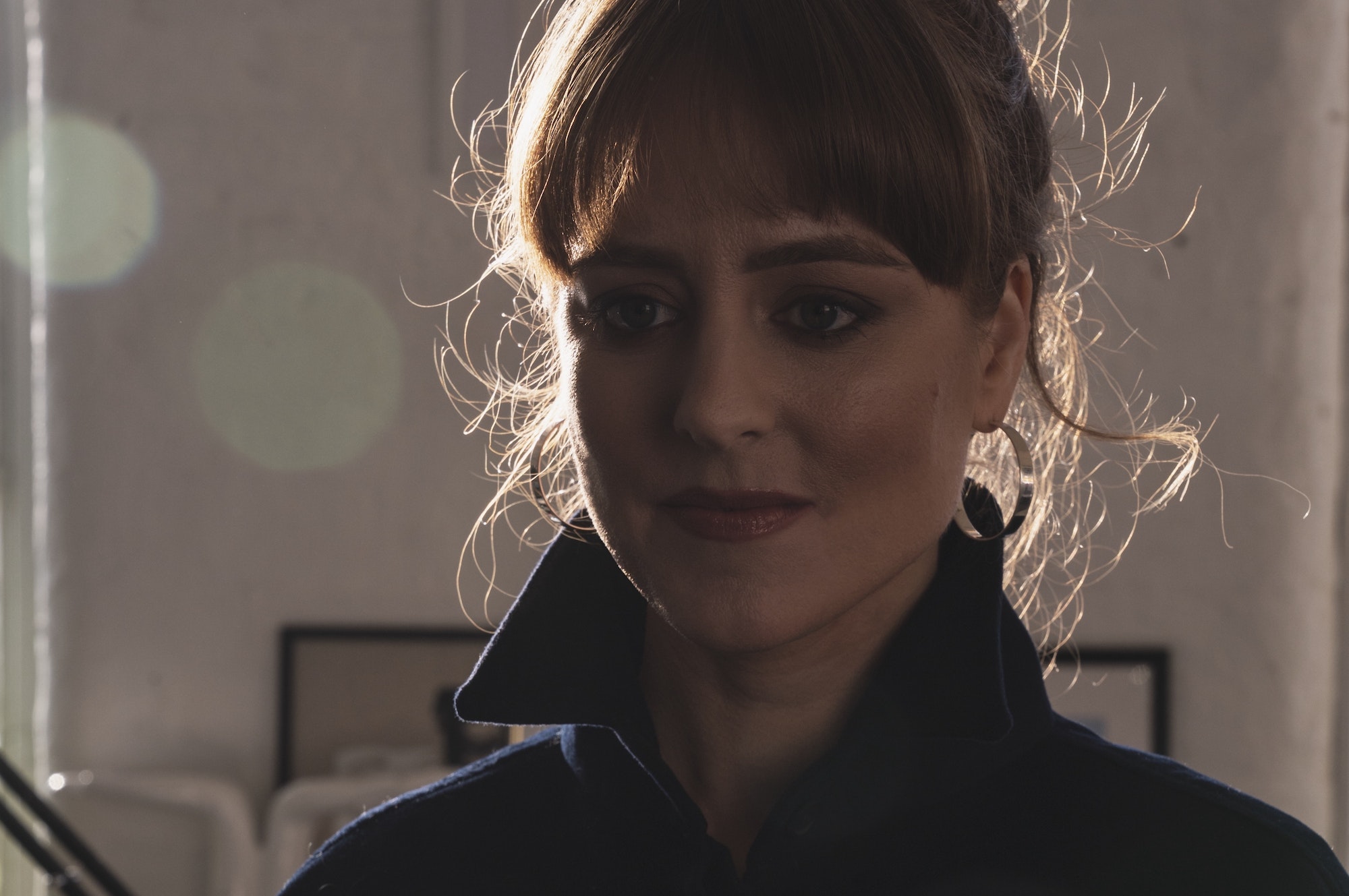 ‘Fir Wave’ has dominated Hannah’s 2021, but her most recent score for eerie four-part drama ‘The Deceived’ won her plenty of plaudits including the MPG Awards’ Original Score Recording of the Year in June. The psychological thriller featured various sinister plot strands with viewers never quite knowing what was real with the music adding an extra layer of fear to an already unsettling narrative. Hannah’s approach to the score was to visit the set to capture different sounds and recordings.

“The house itself was very atmospheric. It had the most amazing old huge creaky doors with brass handles and knockers - these were brilliant to go and sample,” she explains.

With Kontakt, Hannah used the audio she’d recorded on the set to create her own instruments to provide a suitable soundtrack. “Having your own sample instruments is a great way of making a project your own,” she says of the process. “When you record, then manipulate them, I think it's a really beautiful way of working. You’ve got this fantastic musical foundation to launch off.”

Having your own sample instruments is a great way of making a project your own.

‘The Deceived’ project was intense with Hannah having to work to tight deadlines as she joined the team fairly late on in the creative process. “It was hard - I was doing these long, 18 hour days to try and get everything finished,” she says. “Since then projects have become easier in terms of time frame - but when you’re in the midst of it you don’t get time to think about it.”

“It did work out well in the end. It’s almost like that short time period came through in the music and reflected the intensity of the programme too.”

A project which was worked on across slightly less stressful deadlines was the score to ‘Game of Thrones: The Last Watch’. This feature-length documentary about the filming of the final series of the hit HBO show saw Hannah involved early on thanks to a friendship with director Jeanie Finlay.

“I play in this band Magnetic North with Erland Cooper and Simon Tong and she’d synced one of our tracks,” says Hannah. “We met, became friends, and stayed in touch before she asked me to come on board this film.”

Hannah signed the appropriate Non-Disclosure Agreements, then binge-watched every Game of Thrones series before beginning to put the music together. Originally, she created a variety of electronic soundscapes but these didn’t quite work when put to picture. “I sent Jeanie a lot of music but none of it really clicked,” she remembers. “It needed to be more handmade and acoustic. So it really came together when it was just piano, cello, and the theme we created on the music box. It echoed the handmade feel of all these people working behind the scenes on the show for years and years.”

It’s important for any composer to find their own sound, to try and play and love what is unique to them.

Hannah’s process involves creating a sound palette for a score or drawing up a list of instrumentation to use. “It’s important for both albums and film or TV projects. It gives them a distinct sound and also gives you as a composer some limitations, something which can be useful to have in place,” she says.

In terms of working, Hannah uses Logic and Kontakt to come up with her own instruments plus a wide array of vintage synths. “For recording, I have this Universal Audio LA610 which is an amazing preamp and compressor and everything goes through that,” she says. “I’ve also got a lot of synths including a Juno-60 and a beautiful Roland Space Echo. For years and years, I’ve had no money as I’d spend it all on gear.”

Hannah cites some formative experiences with producer, experimental musician, and friend Benge as particularly influential. During the early 2000s, he would collect old modular synths, service them, and in some cases bring them back to life. She used to play with Benge in the band of electronic music icon John Foxx. “I used to go into his studio and experiment with them, then we’d bring the vintage gear out on tour,” she says. “I learned quickly how to recreate the sounds from the seventies and eighties records, it taught me how to play them and get the most from them.”

Unsurprisingly for an artist who has carved her own path through the industry over the last decade, Hannah’s advice for aspiring music makers is to try and stick to their guns.

“It’s important for any composer to find their own sound, to try and play and love what is unique to them,” she says. Hannah also believes that new artists should hold back on releasing their music rather than unveiling unfinished material too early.

“In this age, people feel they have to release music as quickly as possible. But that can really hinder you when starting out. You need to make it as good as you possibly can before releasing,” she explains. “Always try and get an opinion from someone you can trust too. I get sent a lot of music and reply to people and say don’t share demos. Instead, send it when it’s finished, has been mastered and other people have heard it. That applies to whether you’re a solo artist or working for film and TV.”

I learned quickly how to recreate the sounds from the seventies and eighties records.

The last 18 months have been tough for many creatives but Hannah says she’s been lucky enough to have had numerous projects to explore. Alongside the release of ‘Fir Wave’, she’s been busy with broadcasting and other commissions.

“I host ‘Night Tracks’ on Radio 3 and there was a huge demand for radio during the lockdown,” she states. “There was also an incredible amount of amazing music coming out too - it was a time for me to find a focus, celebrate other people’s music through putting these shows together. It felt like they were worth more as people used them to get through their day.”

The next project is a commission with the British Paraorchestra, the first UK orchestra to integrate disabled and non-disabled musicians. The commission will take the form of a full-length album and live concert as long as restrictions allow. “I spent the whole of 2020 working on this record, making demos and composing,” she says. “The recording was pushed back as there are a lot of vulnerable people in the orchestra. I made audio guides, scores in braille, it was a massive undertaking. But I was so grateful for it.”