In a career that stretches back to the early days of electronic experimentation in the 1980s, Anne Dudley has always sought to skip between genres and stylistics. She first rose to prominence as a key member of the synthpop group Art of Noise, collaborating with Trevor Horn (best known as one half of The Buggles). Dudley recalls her Art of Noise days: “It was all based around samples. This was the very early experimental era of sampling with what we would now consider very crude technology.”

“We used the Fairlight,” she continues, “which was the first sampler and therefore extremely limited in terms of what it could do. We were sort of wrestling with the technology. But in the struggle, we found something original to do with it. Full credit to Gary Langham, our genius engineer, who managed to make very dull-sounding samples sound rather unique.”

Dudley subsequently racked up an enviable list of collaborations with leading popular artists including Tom Jones, a-ha, Frankie Goes to Hollywood and Rod Stewart. Nevertheless, as a composer, Dudley says always harboured admiration for film music. “I’d always had the ambition to be a film composer, but I had no idea how one went about it,” she says. “Being in Art of Noise got it all started. People used our material for films and after a while, we were asked to score a few TV things and movies. Being studious types, we would watch films and try to concentrate on the score.

“I always admired John Williams’ score for The Witches of Eastwick. It’s got a real character to it and it’s hard to imagine the film without it. That score set the bar very high. Midnight Cowboy is also fantastic. Planet of the Apes as well. But to come across a score that actually elevated the film in question was quite a thing. “Film music is constantly evolving. I think it will continue to do so. Because it’s still quite a young art form anyway when you think about it. People have only been doing it for 100 and a bit years. Individuals like Hans Zimmer are continually moving the goalposts and trying things that are very bold.”

There’s no reason why more women film composers can’t be doing the good jobs. It will change. It is changing. But we need to keep our eye on the ball.

As the 1980s advanced into the 1990s, Dudley scored a significant critical hit with her score for Neil Jordan’s transgressive and provocative drama The Crying Game. In 1997, she became just the second woman in the history of the Academy Awards to claim an Oscar, for the heartwarming Brit hit The Full Monty. So, how hard is it to establish such a singular voice?

“One of the things that can help or hinder a film composer is the temp score,” Dudley explains. “It can be a real curse for the film composer because directors and editors become wedded to it. Sometimes they have to readjust their thinking. Conversely, they might find something that leads them in the right direction. People do like to talk about music in reference to other music.”

Dudley’s collaborations with the director, likewise, are striking and hit a variety of different registers. From the tentative melodramatic surges of World War II resistance drama Black Book to the tense string and electronic clusters for the disturbing rape-revenge drama Elle, starring Isabelle Huppert, there’s no denying the vitality of this working union.

Their latest movie is Benedetta, a deliberately outrageous and button-pushing drama, based on a true story, about illicit love between two nuns in 17th-century Italy. Packed with explicit sex and grisly metaphysical visions, the film allows Dudley to unleash an ecclesiastical score that aims for theological weight as opposed to surface hysteria.

“When Paul and I met for the first time, over coffee, we discussed 20th-century composers like Stravinsky, Shostakovich, John Adams and Bartok,” Dudley recalls. “We didn’t refer to film music. I’ve never met a film director who is so well-versed and knowledgeable about music. He knows a wide range of music, particularly chamber music like Bartok quartets and Beethoven string quartets. He’ll often point me towards six bars of music from a random place. But he’ll also say, at the end of any detailed briefing, ‘You can do whatever you like.’

“Jerry Goldsmith’s Basic Instinct is another example of a score that elevates its film. I thought that anyone who can generate such extraordinary results out of a collaborator is surely worth working with. Paul’s energy is awe-inspiring.”

Vocals play a significant role in the Benedetta score, perhaps unsurprisingly given the context and atmosphere of the movie. Dudley’s score often conjures an air of sepulchral supplication even as Verhoeven runs rampant determined to push a viewer’s buttons. “I was very keen on using the choir,” Dudley says of the score’s creation. “Inevitably there was a lot of source music using female voices. We used some actual medieval music from a female composer called Hildegard of Bingen who is one of the first composers ever to have their music archived and written down.

“I liked the idea of using the voices in the score. I don’t think we overdo it. Paul wanted a serious, weighty, orchestral score to root the movie in a very austere and serious environment where, if you step out of line, the penalty is death. It’s also a time of great fear because plague is stalking the land. So the mood is quite dark. The score takes on that seriousness. It’s only lightened by the arrival of the disruptive element, the novice nun who’s obviously seen a lot more of life than the other nuns. She’s the impetus for Benedetta to sound off, really.

“Paul plays it very subtly as to whether Benedetta is faking her supposed visions of Christ. Strings can be so versatile. I couldn’t imagine doing a score of this nature without them. It needed the majesty and the expressiveness of the strings. They can make it cold and sinister, or warm and wonderful. Strings will always be the bedrock of the film industry.”

The Benedetta soundscape is further goosed by the presence of speciality instruments including the hurdy-gurdy (“I got to record one of those for the first time, as played by Claire Sullivan”) and a folk band that is used diegetically as source music in an early sequence. Said band also included a medieval fiddle known as a rebec, but Dudley says she chose not to include these sections on the score album as “she wanted the score to stand on its own.”

Jerry Goldsmith’s Basic Instinct is another example of a score that elevates its film.

Although she may not intend it as such, Dudley flies the flag for gender parity in an industry that is undeniably skewed towards male composers. Although in-roads are being made year on year, with the likes of Hildur Guðnadóttir emerging as Oscar-winning success stories in their own right, it’s debatable whether progress is being made quickly enough. “Progress is definitely being made,” she says. “When I go and undertake master classes at film schools for composers, I’d say the ratio of women to men is at least 50/50. Inevitably, that will take a while to work its way into the profession.

“I’m reluctant to think that there would be positive discrimination in favour of a woman. One wouldn’t want to get a job because one is a woman. On the other hand, for too many years, too many of us have not got jobs because we are women. I would urge filmmakers to take people on their own merits. There’s no reason why more women film composers can’t be doing the good jobs. It will change. It is changing. But we need to keep our eye on the ball.” 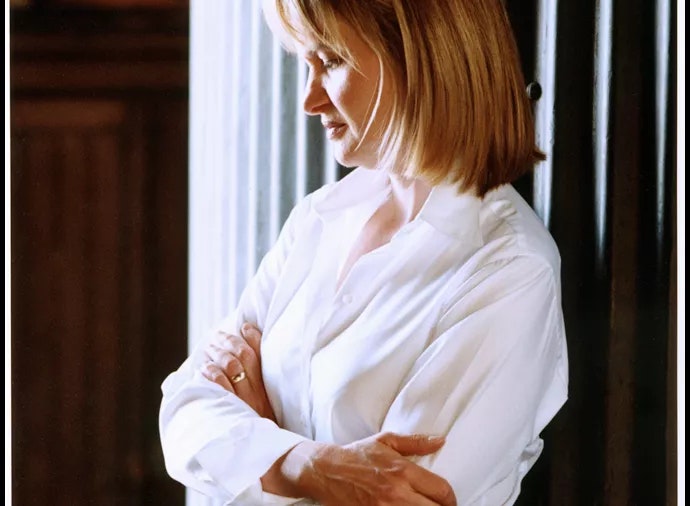 Dudley’s latest project is a standalone album named Crossing the Bar. Named after the Tennyson poem of the same name and primarily composed for solo piano during the height of the COVID-19 pandemic, the album acts as another dynamic form of creative expression. “In the dreaded lockdown, we all spent a lot more time at home,” she explains. “I was getting frustrated with the piano that I had. It was quite old and kept going out of tune. Of course, you couldn’t get a tuner in lockdown for love or money. So, I wanted to explore the idea of getting a new, slightly larger piano.

“I found one and when it arrived, it was beautiful. I spent a lot of time playing it and getting to know it. This piano was longer and had more resonance in the bass end. I started to write some pieces and I began to enjoy its different characters. Crossing the Bar means the journey from life to death, but here the term also has musical connotations. In my career, I’ve been lucky to cross genres from pop to classical to film music. Once I found the title, I decided to explore a lot of ideas, a bit of Ravel, a bit of neo-Baroque and it developed from there.”

Given that Dudley has consistently crossed the divide between standalone concert music and somewhat less autonomous film music, one wonders how the creative approaches differ between the two mediums.

“With film music, the picture gives you a structure to work with,” she explains. “In concert music, you’ve got to create your own structures. But it is very liberating. If you feel the need to speed things up or add bars in, you can do it without being restrained by the cue having to last a certain amount of time. Because lockdown was so hard for everyone, I found composing Crossing the Bar to be very satisfying.

“By the time I got the string players in, we were all able to be in the same room together. I had done some remote recording but I didn’t really enjoy it. To have people together again was a lovely thing. It makes one remember why one became a musician.”