Pinar Toprak is talking about the time she lost out on a job she really wanted because they were only interested in hiring someone who had scored a film that had grossed over $1 billion. “I have kind of a stubborn personality," she says. “When someone tells me I can't do something, I really want to do it.” Determined to join this exclusive group of box office-smashing composers, she finally accomplished that with Captain Marvel. "I remember waking up and seeing the headlines. That was pretty monumental.”

It wasn’t just monumental, it was history-making. With Marvel’s 2019 female-led blockbuster, Toprak became the first woman to score a major superhero movie and the first to compose for a film that made more than $1 billion (the final tally was $1.1 billion worldwide). The 40-year-old Turkish American composer has resolutely smashed the glass ceiling time and again during her prolific career.

“I worked over 20 years for my overnight success,” she says over Zoom from her studio in Los Angeles.”It didn't just happen at once. I had a lot of failures. I learned from those failures. It was good for me to learn those things before getting a Marvel film. I really feel that I've paid my dues.”

Toprak is a veteran of composing for films, video games, and documentaries. She got her big break scoring combat game Ninety-Nine Nights. Since then she’s won three International Film Music Critics Association Awards and been shortlisted for an Academy Award nomination (for her work on 2009’s The Lightkeepers). She’s also created music for the sailing documentary The Wind Gods, Superman origin TV series Krypton, and multiplayer phenomenon Fortnite.

“Composing is something that I've been doing my whole life,” she says. “For me, it's like talking without words. It’s my daily soul vitamin. The goal is to create something that I'm proud of and that other people will resonate with.”

I became the first woman to be hired on a $100 million-plus movie and the first one to get fired from one.

But Toprak very nearly took a different path. She moved from Istanbul to the US at the age of 17 and ended up studying jazz at Berklee College of Music, Boston, majoring in piano performance, even though what she really wanted to do was composing. “A lot of people told me I probably won't be employed in film scoring, that the chances are slim.”

One day, she went to Tower Records near her campus and started listening to Hans Zimmer’s score for The Prince of Egypt. Suddenly, she knew what she had to do. “I realised that my desire to do this was stronger than my doubts. I realised that if I'm feeling this way, there must be so many other people feeling this way as well. If we all withdraw from our dreams, the world doesn't change. I made the decision that I was going to do this, for better or worse.” She bought the soundtrack and switched her major to film scoring the next day.

Since the success of Captain Marvel, Toprak has been busier than ever. Her most recent release was Us Again, a heartwarming short film by Disney about an old couple rediscovering their youth through music. She wanted the score, which was influenced by funk and soul, to reflect their deep love for each other. Toprak also wanted to explore the theme of being present in the soundtrack. “How many things do we miss every day because we don’t look? You know, we take things for granted. For me, [the music] was something that's so in the now, but also hopefully timeless. That was a driving emotion for me."

Being in the now is a mantra that has served Toprak well over the years. She holds up her arm to the camera to show a tattoo of an angelic symbol that looks like a treble clef. “That means be present,” she explains. “Because I think a lot of times we focus on the future or reminisce about the past. Now it just kind of disappears. So for me, it's really important to enjoy it right now. That's what matters.

“I also joke with my kids that my life motto is my blood type, which is be positive. I'm optimistic not because I haven't had difficult situations in my life. The opposite. When I wake up, I'm grateful that I actually woke up. That I get to do this for one more day.”

Her grounded attitude means she’s been able to take risks throughout her career with relative ease. When she was auditioning for Captain Marvel, she decided to hire a 70-piece orchestra. “Go big or go home!” she laughs. “I'm a huge believer in doing everything we can so we don't feel remorse. They didn't know me and they didn't know what I could do. So I wanted to show them I could handle an orchestra.” She also sent over a video of herself in the studio. “I knew I had put my best foot forward. If that wasn't going to work out, that was okay with me. I was at complete peace with the outcome.”

Going that extra step seems to be a recurring theme with Toprak, an artist who believes in her own vision so passionately that she’s been willing to invest her own cash to make sure each score of hers is the best it can be. She had less than three weeks to create the soundtrack for The Lightkeepers and used some of her own savings so she could record the music live in Belgrade, Serbia. Toprak was also hired to work on 2017’s Geostorm but was left in nearly $100,000 of debt after she was let go from the project when the studio switched creative teams for the reshoots.

“I became the first woman to be hired on a $100 million-plus movie and the first one to get fired from one. I thought: ‘How am I going to get hired again?’ Also, I was a single mum to two boys that I was taking care of on my own. The rug gets pulled from underneath you and you have to recalibrate. It almost came to the point where I was going to ask for money from my agents for groceries. It was pretty dark.

"I learned a lot about my ability to stand back up from failures like that. I didn't think of it as my own failure. It's just circumstances that have nothing to do with us. It also taught me how much I love film music. Because I wasn't going to let that ruin everything else that I had worked for. It made me more ambitious.”

He [Danny Elfman] gave me an opportunity. I love his soul, his creativity, his brain. He completely shifted my career for the better.

She credits Danny Elfman for changing the course of her career after she was asked to work on additional music for Justice League. “He gave me an opportunity. I love his soul, his creativity, his brain. He completely shifted my career for the better.” Since then she has become Hollywood’s go-to composer for the female superhero experience with Captain Marvel and Stargirl, a coming-of-age TV series based on the DC Comics character.

Toprak has also used her voice to highlight the experience of women off-screen too, especially the punishing double standards that mothers are held to in the industry. She calls this the “hypocrisy of parenthood”. When she was pregnant with her first child, she kept it a secret from her agent. “I wanted to eliminate any reasons why I wouldn't be hired on a project,” she explains. During her second pregnancy, she worked back-to-back on nine films and was at a scoring session just 30 hours after giving birth to her son.

“None of it affected my responsibilities. But if there was a slight chance that they could see it otherwise, I wanted to eliminate it. As far as the hypocrisy goes, if you're at a meeting and one of the guys says: ‘Hey, I've got to leave early for my son's soccer practice,' they pat him on the back. Unfortunately, when a mother says that, they think: ‘Oh, she won't be able to do the work.’ That's a really unfair way of thinking. It will take a bit more time for things to feel more equal in that regard. A lot of these things are changing, which is great, but when I was pregnant 16 years ago, nobody was talking about this.”

She’s taking an active role in trying to diversify the world of film composition by working as an advisor for Reel Change, a new project by Christophe Beck and the Society of European Stage Authors and Composers. The fund offers grants and a mentorship programme for composers from backgrounds that have been marginalised in an industry that has been dominated by white men. “We all have this mission that we want to pay it forward,” she says.

What Toprak really wants is for her achievements to inspire other young girls and women to dream big, just as she has. That’s what she cares about more so than awards, box office receipts, or breaking records. "Of course, any kind of success we get, it would be a lie if we say: 'No, it's not important.' It's good to feel that accomplishment. Because it's a little checkbox along the way. 'Okay, you're on the right path. Keep doing it.' 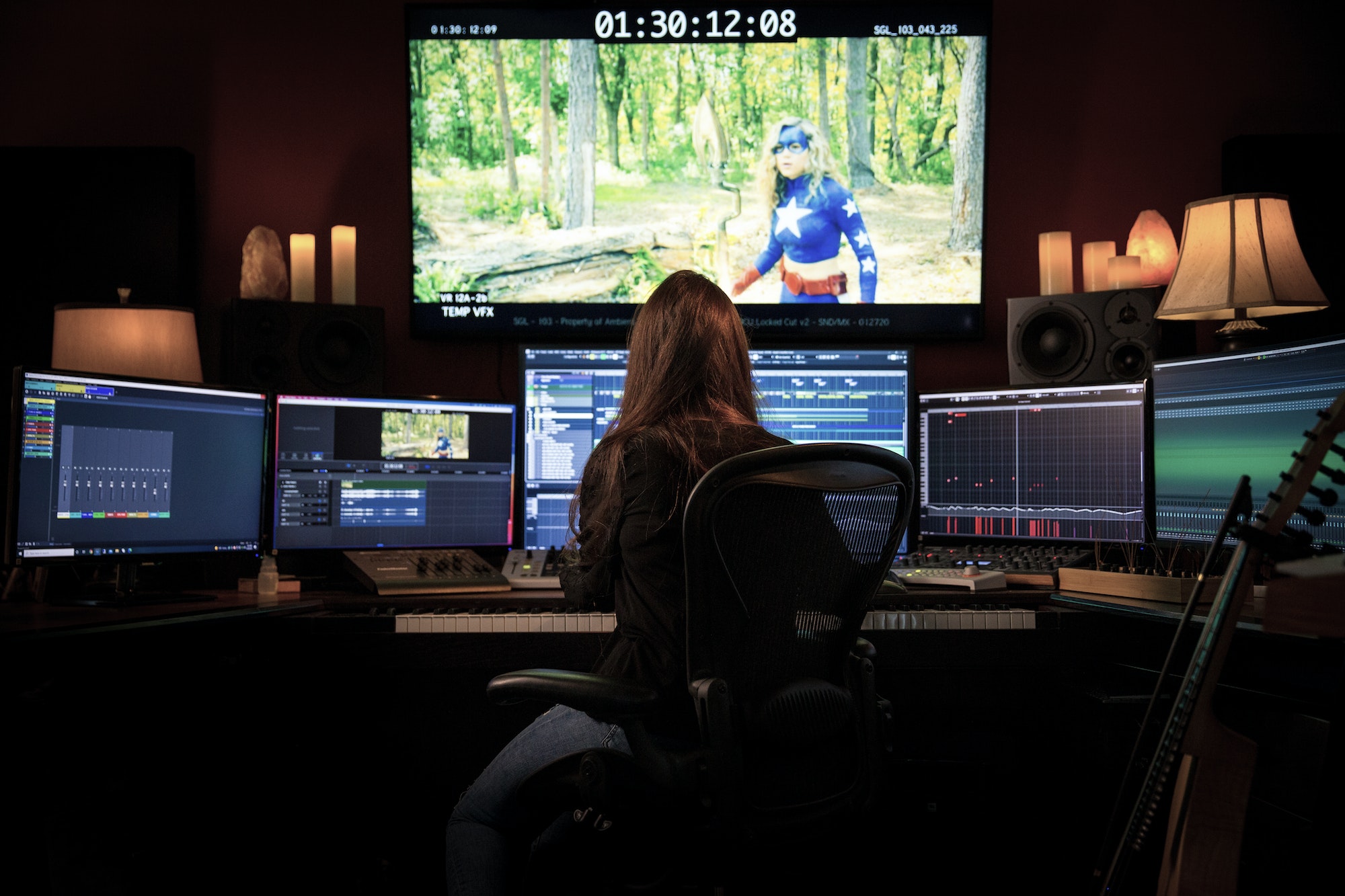 "But for me, the rewarding thing is if I know it's influenced people along the way, hopefully, to give them an example of what they could do. If they realise that: 'Oh, this person, when she was doing it, there weren't many. But she did it. I could do this. It's possible.'"

Most of all, she hopes she can make a lasting impact through her music. Toprak wants her scores to inspire generations to come, just as the Superman soundtrack moved her so inexpressibly when she was a child. "I think a lot of creators create because that's the way we touch immortality,” she says. “It's something that will go on, long beyond when we're gone.”