“What most people know me for…” Segun Akinola begins, before catching himself mid-phrase. “Sorry I started this sentence and thought, that’s not specifically true.” He laughs. “What a lot of people know me for is writing the music for Doctor Who.” He uses language with a precision that is echoed in his scores.

Segun Akinola took over from Murray Gold as composer for the landmark BBC series in 2018. Yet the weight of expectation in scoring a show with such cultural baggage is decidedly different from the demands that have played as big a part in his career so far. “Before Doctor Who,” he continues, “what people knew me for, and actually what I'd say some people still know me for, was writing music for [David Olusoga’s BBC documentary] Black & British: A Forgotten History.” The two shows required very different approaches.

With a love for literature and a background steeped in myriad sounds, from music playing in the British-Nigerian home he grew up in, to learning classical piano, drumming in church bands, and playing with salsa groups and orchestras, Akinola’s broad interests have furnished him with the tools to meet every project on its own terms.

The composers he admires are those whose sensibility, rather than whose sound, have come to define them. He points to John Powell and Henry Jackman as contemporary inspirations, largely for their ability to work on a range of projects and still retain their own voice.

Akinola can count himself among them. Having studied composition at Royal Birmingham Conservatoire and NFTS, he has since worked with director Shola Amoo - on breakthrough 2016 film A Moving Image, the short Dear My Shakespeare, and 2019 Sundance favourite The Last Tree - scored numerous BBC documentaries and is currently deep in series thirteen of Doctor Who. He writes concert music in his spare time and has an album on the back-burner.

When we speak over video call, he has just seen two major projects air - Apple TV+ and BBC documentary 9/11: Inside The President’s War Room and Stephen, a three-part ITV drama following Doreen and Neville Lawrence’s continued fight for justice over the racist killing of their son Stephen Lawrence in 1993.

Although radically different in form and content, the tragic and lasting significance of both stories demanded a degree of emotional consideration and musical dexterity from Akinola that almost seems to transcend the role of the composer altogether. At one moment in 9/11, as the first tower collapses, Akinola draws back and withholds all sound from the scene. There is silence in the dust. "Is this a moment for us to just let the weight of what someone is saying have the space that it needs?” he asks.

If anything, this is indicative of an approach that always puts the needs of the story first. For a composer with so much music at his disposal, it’s that sensitivity that makes Akinola’s work truly unique. 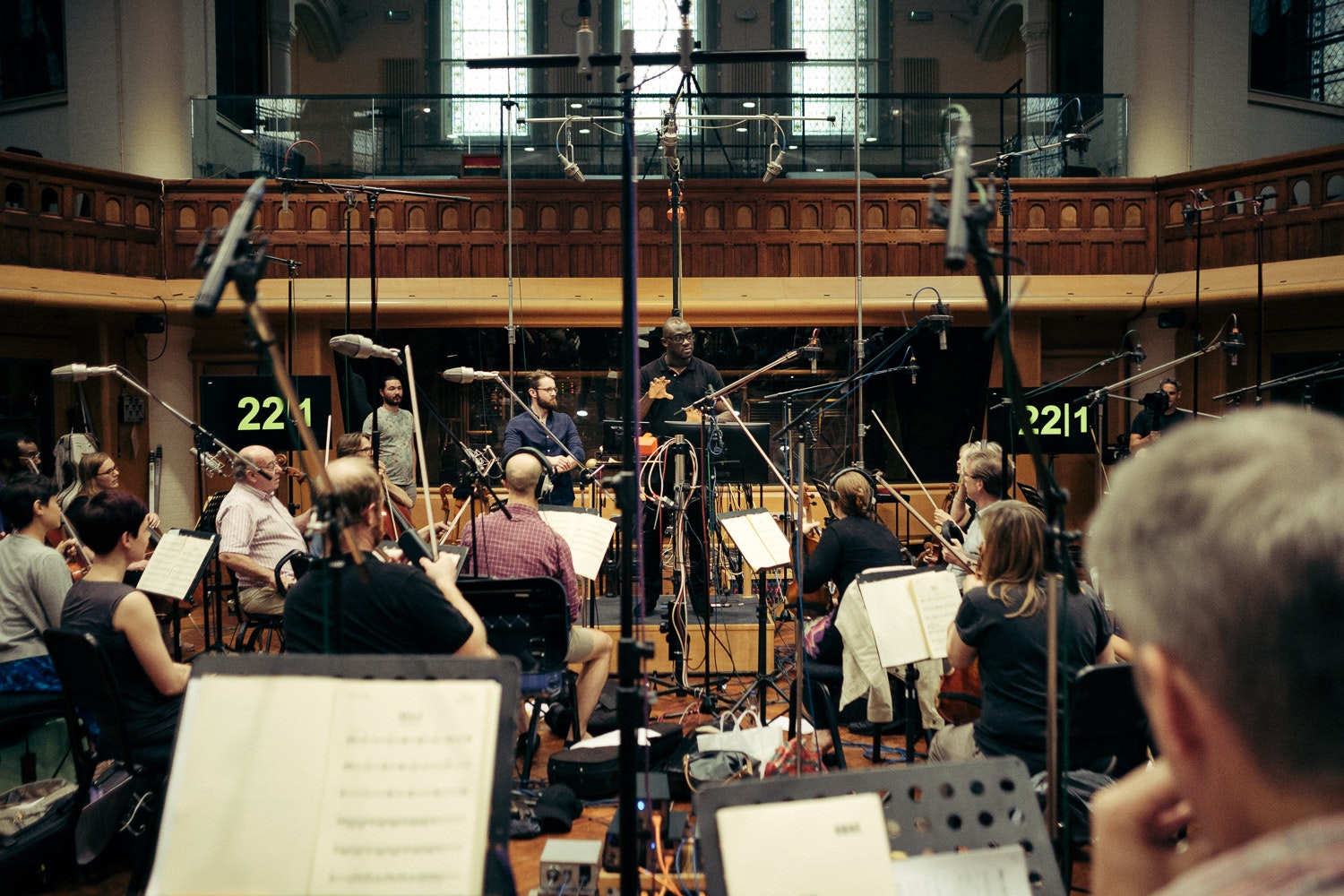 Two of your most recent projects, Stephen and 9/11: Inside the President’s War Room, have just aired. What does it feel like to see your work out in the world?

I think that serious topics have, for some reason or other, been quite an important part of my career so far. Although, in recent years it has been more about Doctor Who, which is not based on reality in the slightest bit.

What's been really interesting with Stephen and the 9/11 film coming out, is that they are absolutely based on reality and moments and events which are very difficult. Difficult experiences, a lot of pain, a lot of emotion. They are obviously quite different, because the 9/11 film is a documentary, whereas Stephen is a drama, but we are talking about real things that took place.

I think the fact that it is something that is very serious automatically produces a very different response. It's really interesting seeing how people talk about thinking it was a great thing to have worked on. It's quite strange saying, “I'm really glad you enjoyed Stephen or 9/11” because actually, I'm not sure ‘enjoy’ is the right word.

As a composer, how do you approach subjects that carry such emotional weight?

Whereas you compare that to Stephen, and Stephen was a case of, “OK, we know that we need music, but what music do we need and where do we need it?” It was a real challenge to figure out what the music needs to do. It needs to support the emotion, but it can't be sentimental or be pushing the emotion on people, but we also don’t want music that is completely cold. It's very easy to say, “no piano, no strings”, because that's what everyone would assume, and no one wanted to do that. Although at the end, we did put a little bit of piano in there. It was really a case of lots of trial and error. I tried loads of vocals, I tried some more ambient stuff, I tried a lot of different things.

For me, being a Nigerian there was always music in the house.

Stephen and 9/11 deal with real, tragic events that have, in their own ways, taken on huge symbolism and significance. How much can you bring your own experience to those stories to the work, and how much is it a case of responding purely to the job at hand?

You can never know what's right until you're there. When I did Black & British: A Forgotten History, for me it was a very emotional experience because I was just excited that they were making the thing, let alone having the opportunity to possibly write some music for it. From the very beginning, I didn’t hide any emotion in the music I was writing, and that worked for that series for the team making it.

They had a brief, that was very much a case of trying to play things the right way in having some music that links to Black British history, but not in a really clichéd way, in terms of “oh, there's something in Africa, let's find drums.” But there's always nuance in everything because for me I felt like, as a British Nigerian, drums are really important and it's definitely in my history, particularly for the tribe that I'm from in Nigeria, the Yoruba. I felt like we can't be general about it, we have to try and be specific, and pull from musical influences from across Africa, but also modern Western influences as well because we're talking about Black British history.

Whereas you take something like Stephen, and actually, I think my emotion towards it got in the way a little bit and I had to step back from that and try to look at it from a different perspective. And all I mean is that I find it really emotional, so it was really a case of pulling away from that and having to just look at trying to tell this story, or the chunk of this story, in the best way for this particular series.

You hinted earlier at the idea that certain instruments - for example, strings and pianos - have certain emotive qualities. Are there musical tools you draw on as a composer that function in the way an author might draw on narrative tools in story-telling?

Yeah absolutely, and I think it's one of the really exciting things about writing music to picture because, on the one hand, viewers have an understanding of certain things that happen musically, whether that be certain instruments or certain groups of instruments, and what they mean in a particular context.

But at the same time, there's also this exciting thing about how you express all of these moments. Sometimes you need to go with what might be expected and just understand that that's the right thing to do in that context.

This actually was one of the interesting things about doing the 9/11 film, because I was aware from the beginning that doing this film was not about me and not about the music. I knew it was a case of having to support the story and being very sensitive and delicate. Now that doesn’t mean that it has to be something that could be on any other TV show, made by anybody else. Not at all. I believe that you can always be distinctive. I think it's really difficult to be unique every single time with every score, although it's fantastic to try to be. But I think what you can always do every time is to be distinctive, and so my question was, “how can I do that within this context?”

One of the answers to that was working with manipulating audio. So I was time stretching and pulling pianos and messing with audio. Some of the more ambient, electro-acoustic cues supported the emotion really well. There was a moment in particular where what was being communicated was the horror of seeing a plane go through one of the towers and so the music there is really quite brash and aggressive. If you take it out of the context it probably does sound like the cue from a horror film, but it's something that worked within the context of this film. There are always these moments where you can push, not barriers, but the size of the box.

I believe that someone's voice is purely theirs and is not based upon something specific or singular that can be defined by genre.

The versatility of your palette suggests you feel comfortable stepping between sonic worlds, whether they be orchestral or electronic. Is that unusual in relation to a more classical training?

You learned classical piano at a young age and then became enamoured with the drums. It sounds like these experiences and opportunities were quite formative.

I started learning the drums with someone who was very much in the mould of a session drummer, and that was absolutely critical. I remember I went into a lesson one day and I can't remember what music it was, but I made fun of a type of music, and I got immediately shot down by my teacher who said I should be listening to everything. Good music is good music. That was such an incredibly important moment.

I also just really started reading a lot of books, and that got me into cinema and stories. I also got really into recording. I read everything I could about recording and wanted to be a record producer. Particularly I was influenced by Quincy Jones, Walter Afanasieff, and Arif Mardin, the arrange producers. Oh, and I was really into musicals as well. All this stuff was cooking away.

It's a really good question. It's that whole thing of how do you bring yourself to a project, and I feel like that is the answer to the question, you bring you to it. Simple as it is. I believe that someone's voice is purely theirs and is not based upon something specific or singular that can be defined by genre. I think it's a case of sensibility more than anything else.