I’m standing on the eastern end of Lyon’s Pont Gallieni just after dusk, waiting for a friend. To pass the time, I put on Shida Shahabi’s music, and try in vain to connect sound with image. At this intersection of road, river and rail, movement is all around, but none of it quite aligns with Shahabi’s carefully paced soundtrack.

A change of scene provides a better visual match. A week later, I’m sitting by the harbour in Bristol, where the pace is slower and more uniform: people saunter, stroll, and amble through their Sunday afternoon. And much like Shahabi’s compositions, there’s a collective feeling of wistful peace. 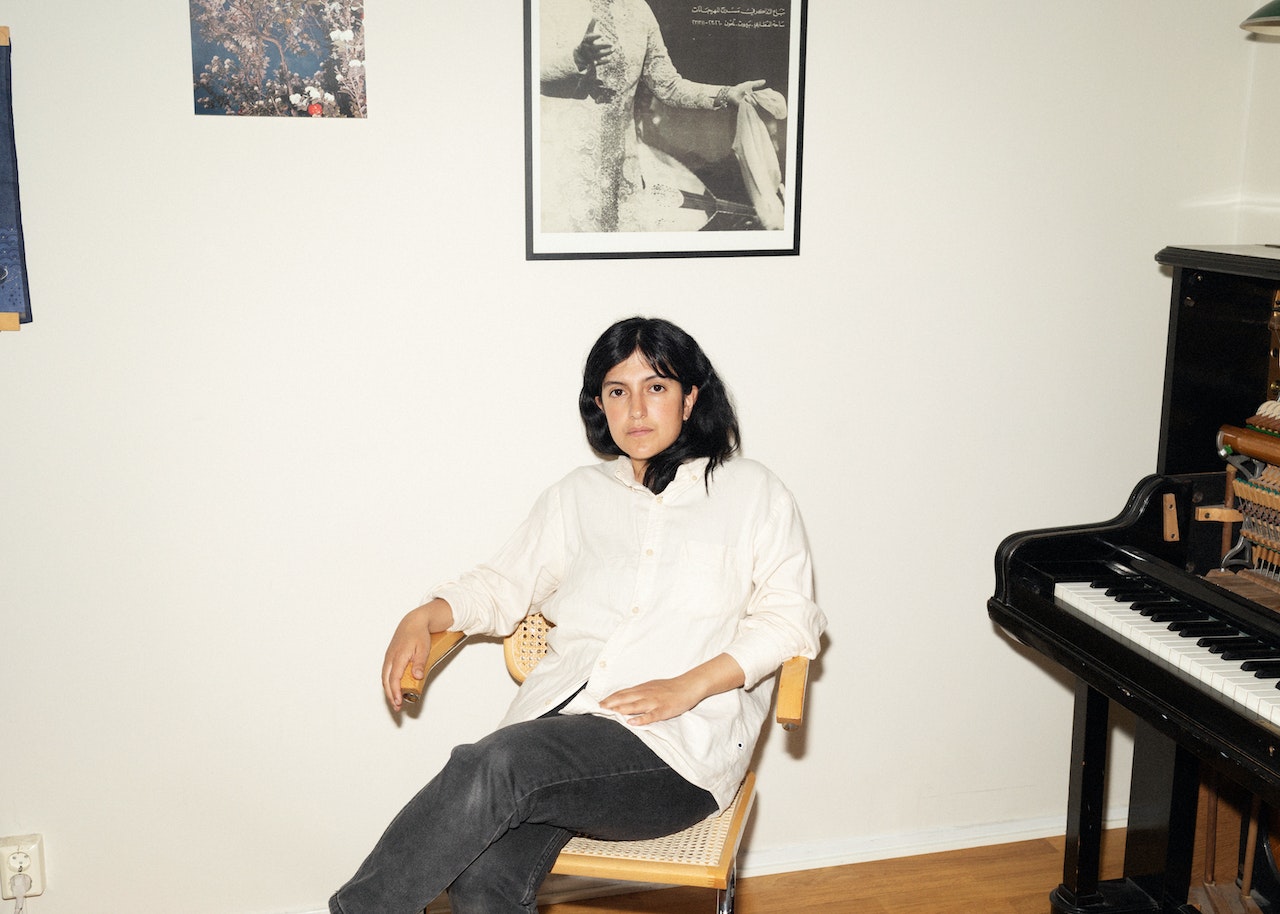 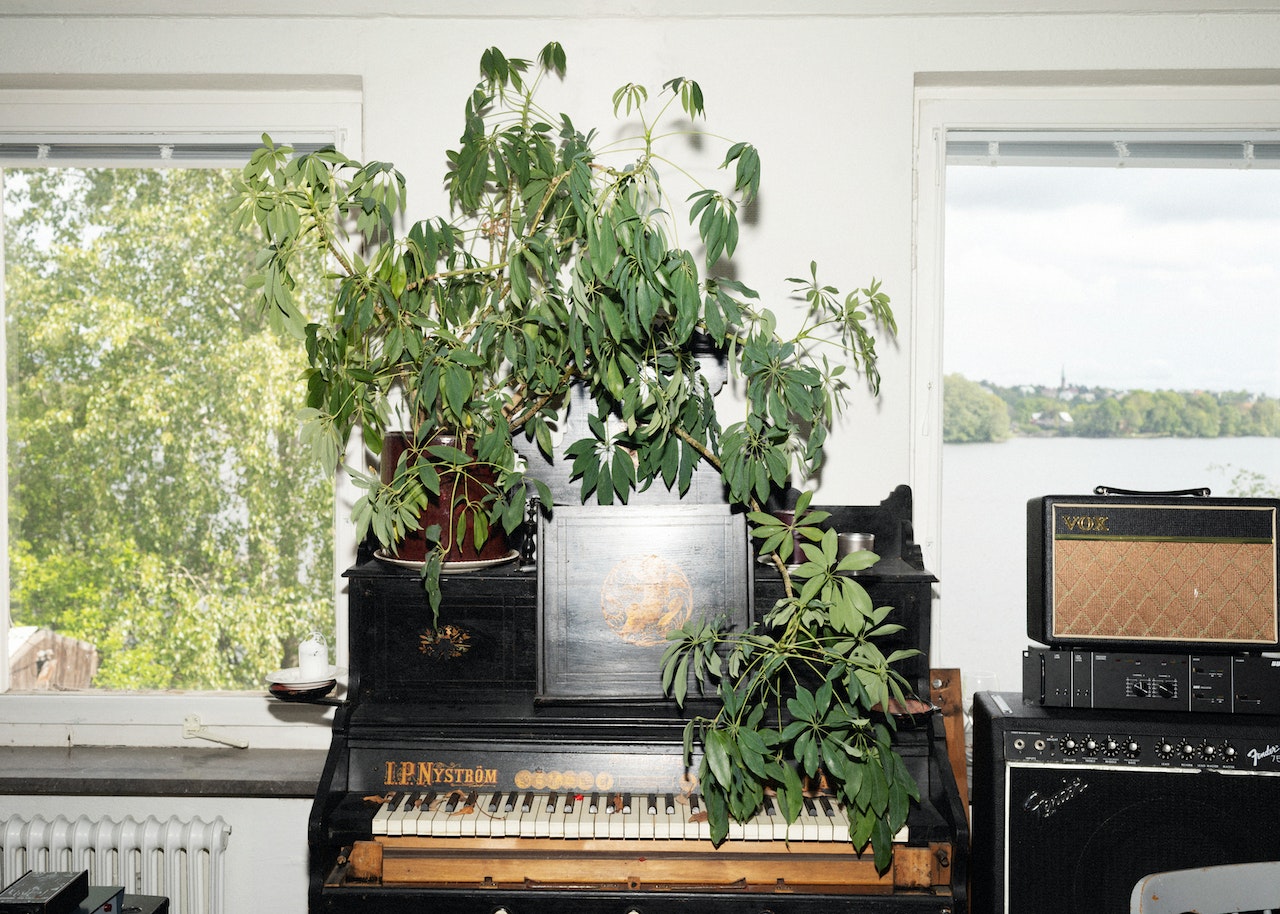 When Shida Shahabi eventually realized that all she really wanted to do was write her own music, her aim was simple: “to create simplicity – a safe space where I could understand how I want to work in as simple a way as possible.” The first manifestation of that approach came via Homes, the Stockholm-based composer and pianist’s debut album from 2018, which augments Erik Satie-esque piano etudes with sparse, bottomless textures.

Though it never ceases moving entirely, Homes does have a touch of the ambient about it, an element Shahabi tapped into on her follow-up EP, Shifts. Here, there are more strings, and more loops – literally, in the case of ‘All In Circles’. That particular track flirts with melody but ultimately rejects it in favour of one of Shahabi’s favourite tricks: the all-encompassing accompaniment. There’s a strong melancholic air to the listening experience, whether in melodic nods to Debussy or Chopin or in yearning for a melody that never quite appears. After scoring a number of short films, she’s now working on her third album.

I started my whole music-making process with samplers. I remember working with Simpler in Ableton Live and putting in random field recordings.

It’s hard to avoid falling back on visual metaphors to elaborate on Shahabi’s ultimately simple music, but the relationship between sight and sound has been a formative one for her. “I have a background in visual arts,” she says. “I draw inspiration from a lot of different artistic mediums: from visual art but also from film and performance. I was very into film during my younger years. As well as my experience with editing, I worked a lot with moving images during my studies.”

The piano is a mainstay of Shahabi’s work. She first approached it the age of nine, and parts of the Western classical canon blended with MTV and Iranian music to form the soundtrack of her youth (her parents moved from Iran to Stockholm in the ‘80s to flee the war with Iraq). Later, as she moved through the punky DIY scene and the more academic experimental electro-acoustic crowd, Shahabi enrolled at the Stockholm Royal Institute of Art, an interesting move given that she was predominantly a pianist. “When I felt that I’d lost the motivation to continue educating myself in music, I realized there were more advantages to studying fine arts and visual arts. I realized [the Institute] was a safe space for me to explore what sort of language and artistic practice I am interested in.”

Though she learned the ropes making and editing art films, music never left her. “After a year or two, I started leaning more towards sculpture and sound installation projects. My professor was the one who said ‘I think you are still into music and that you are finding your own relationship with it’. I think he was right.” But why move away from music education in the first place? “I think I stopped being interested in music when it became very narrow in its definition of what ‘quality’ was and how you should master creating or playing music. It started to get uninteresting for me, so I wanted to go down another path.”

Future Music described Homes as ‘a masterclass in simplicity’. It’s an album that centres the piano but does it with a twist. “I wanted to see the piano more like a field, so my method was similar to the process of field recording. It was a very long process of using different microphones and techniques. After a while, I realized that I really liked the very detailed and close-up piano mechanical sounds that appeared, and so that became the core of the whole record. It became an audio research project on how the different parts of a piano can sound.”

This meant precise placement of the microphones – some close to the hammers, some under the keys, and some at the back of the piano. (You can hear the clicks and scrapes with remarkable clarity on the record). “From there, I did a field study on what sonic qualities each part of the piano construction had, only using the ones that sounded interesting and stirred curiosity in our listening.”

Part of that curiosity emanated from the piano itself. Made by now-defunct makers J.G. Malmsjö, it’s a big, old-fashioned upright that’s been around for over a century. “It doesn’t really matter what type of microphone you use, each piano is a totally different instrument. I think the age of this piano and its not-so-perfect health is a very big reason why it sounds the way it does in the record.”

Alongside her own solo output, Shahabi has scored a variety of short films. Niki Lindroth von Bahr’s animated quartet The Burden and Maria Eriksson-Hecht’s bildungsroman Schoolyard Blues were two Swedish creations that premiered in 2017, and both projects appealed to Shahabi’s inquisitive side. “Usually, there is a part in the script that makes me interested and curious. It's never at the beginning or the end, it's always somewhere in the middle. Maybe it's a character or a relationship. It could be a feeling that I get over maybe 40-50 pages.”

I’ve always loved modulating things. Before I found the confidence to really see myself as a composer, I was working a lot with field recordings and shaping sound.

A more complex approach was needed for Lake on Fire, described by its director Jennifer Rainsford as ‘a subtle science fiction short film about regret, and an A.I. only interested in humans for giving love advice’. Set in a forest created by artificial intelligence, Shahabi drew on the fugues of J.S. Bach to add sonic complexity to Rainsford’s landscape. “There was also something historical and something that is deeply traditional that we projected onto this very complex artificial intelligence. I really wanted everything to draw a relation to each other. And I feel like you notice that as a listener as well. The themes are related to each other like a family.” Alvaret – another collaboration with Eriksson-Hecht that depicts the moving relationship between a daughter and her widowed father – struck an entirely different note, as Shahabi moved away from the piano entirely, to synths (June 60, and a Prophet One), plus a baritone guitar and cello in search of an earthier sound.

The ease with which Shahabi moves through artistic worlds suggests someone to whom collaboration comes naturally, but she admits it’s a bit of a struggle, especially when letting others shape your work as somebody used to working alone. “You have someone who, by the end of the process, needs to feel happy with your work. That is a challenge if you’re used to being a recording artist where you can create your own ideas and be authentic. Sometimes you have to really kill a lot of your darlings. But that is a part of a collective process and teamwork. There are a lot of other parameters that need to get space.” 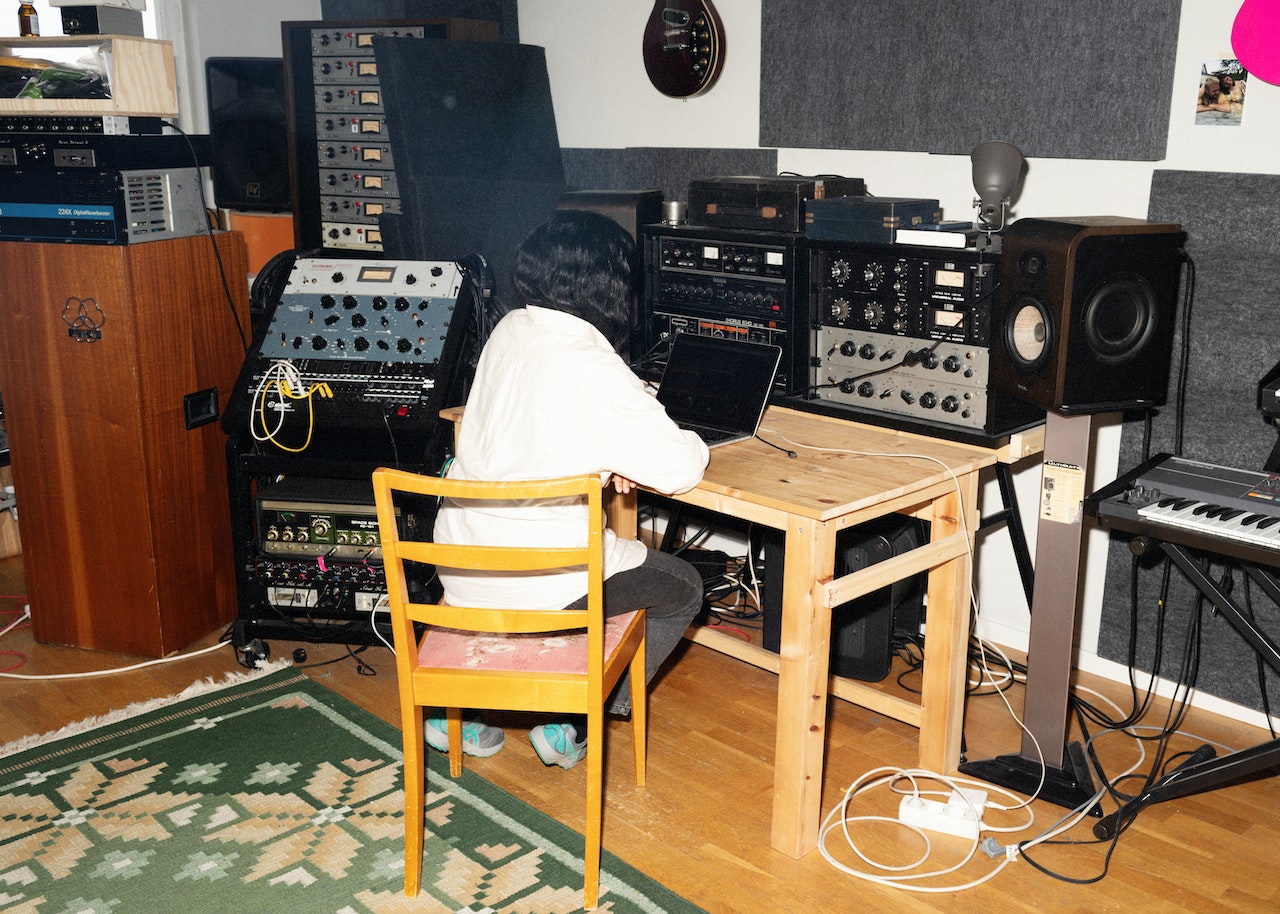 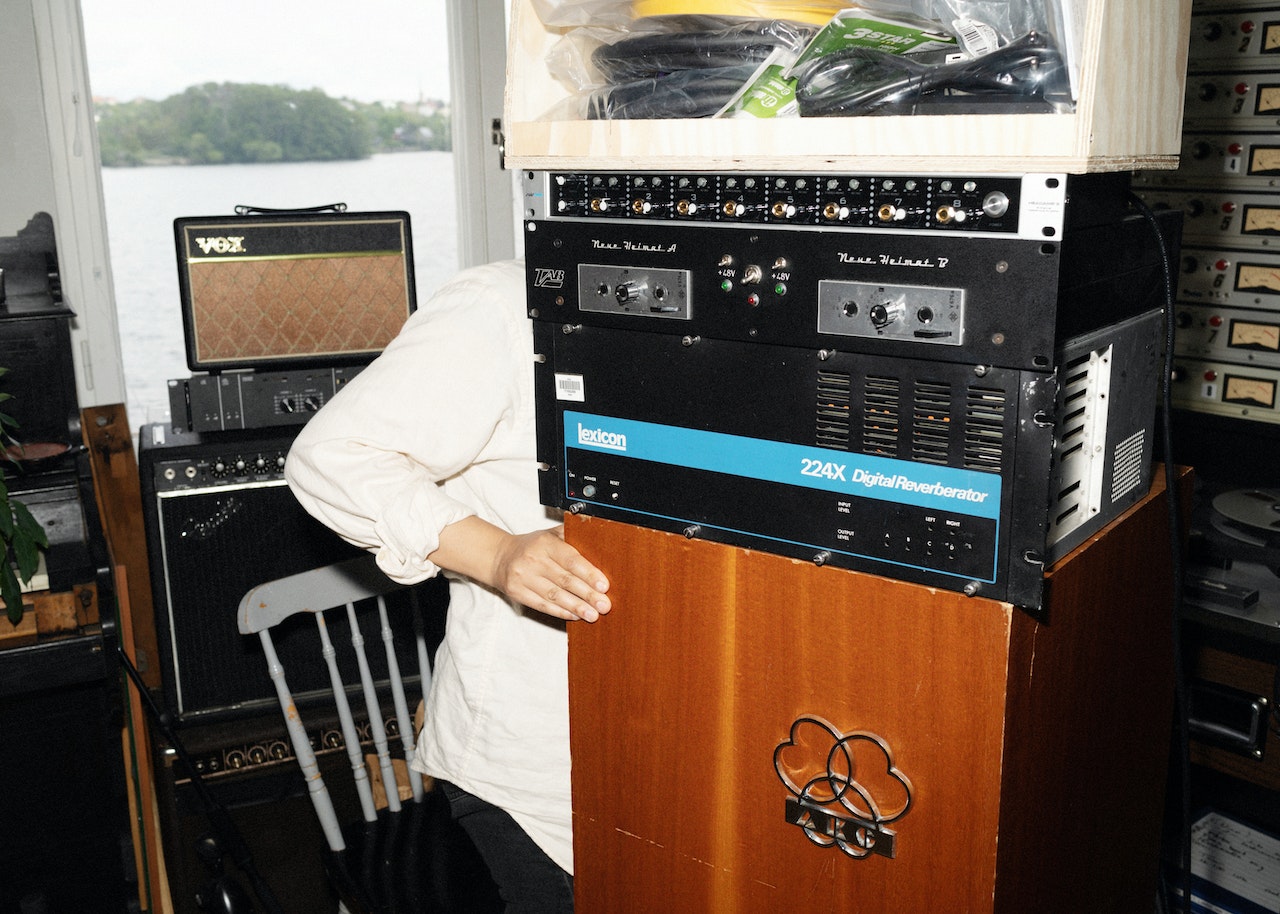 Process is crucial – either between director, producer and composer (“you create a process where you actually gain energy and curiosity from each other. That’s my ideal production!”), or in her own personal creations. But beginning any compositional process requires a certain level of inner peace. “You need to be in a certain state in your body in order to perceive music in a certain way, but also in order to create music in a certain way.” She cites ‘deep listening’ pioneer Pauline Oliveros as a key influence. “I remember when I got to know about her sonic mediation deep listening methods. Her ideas on using your listening as a compositional method will stay with me for the rest of my creative life.”

Once inner calm is established, Shahabi gets to work. Technology and effects are used sparingly, but in her film music she branches out from her roots in acoustic music. “I’ve always loved modulating things. Before I found the confidence to really see myself as a composer, I was working a lot with field recordings and shaping sound. I still have that within me and I still work that way. You can still hear that when you listen to my acoustic recordings. There’s a strive and an interest to create different sounds other than the traditional acoustic experience.” Creating something new and surprising has also come from adding layers of complexity through compositional algorithms: repeated, isolated patterns, pre-determined groupings, and self-imposed obstacles that challenge you to write differently. “You need surprises sometimes when you write music. It shapes your brain and your listening which can be necessary sometimes. Because you can also get tired of your own language and the things you default to.” 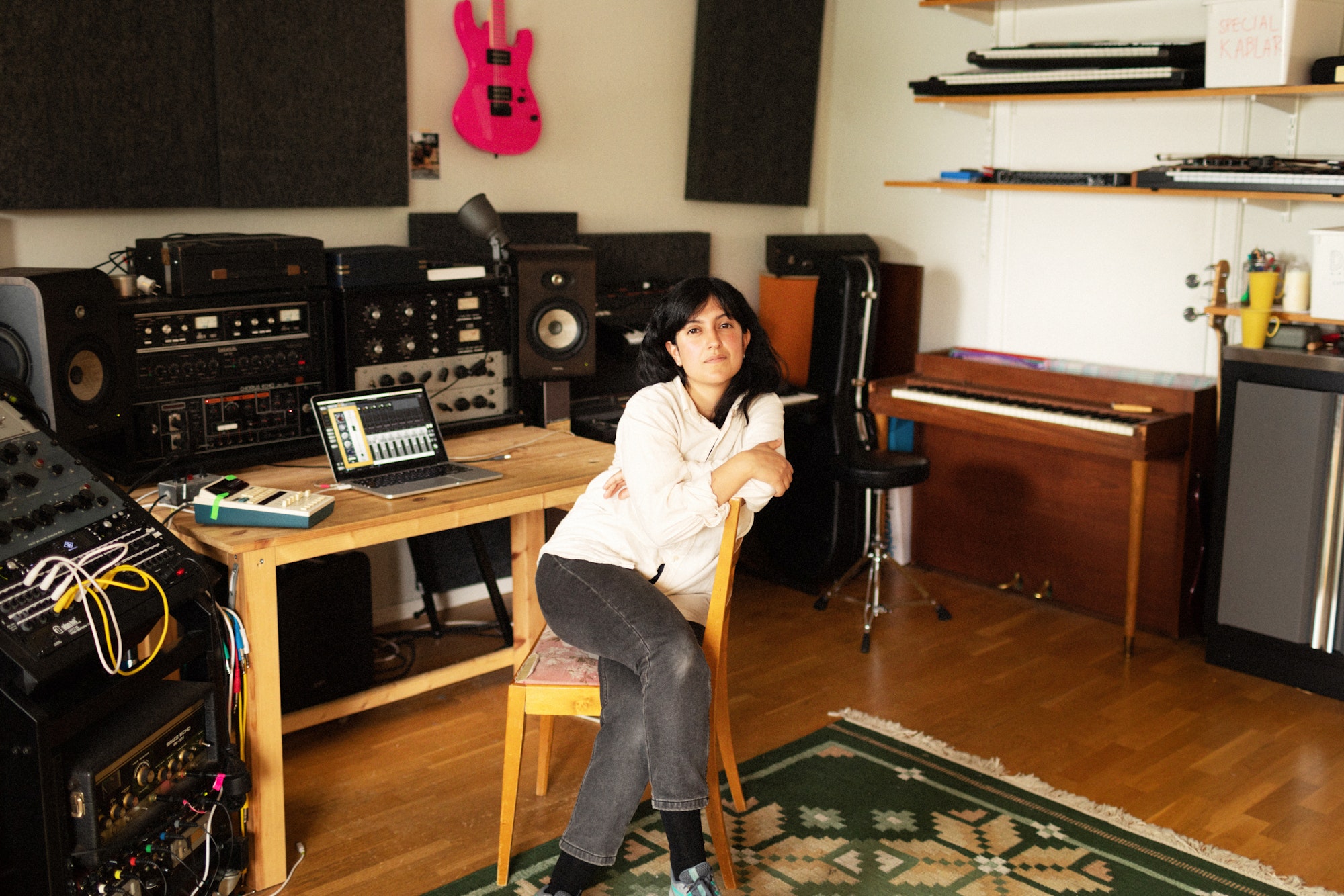 Along with picking up tunes by ear, electronic manipulation has always been a key part of Shahabi’s composing toolkit. “I started my whole music-making process with samplers. I remember working with Simpler in Ableton Live and putting in random field recordings. I would listen to each frequency range in the sample and look for something interesting in it. I like how those plugins can really bend and create a character that is so far away from the original. I love working that way. I think a lot of my upcoming material that will be released will show a different side of Shifts and Homes.”

As she moves towards her second full-length album – she’s getting close to the mixing stage – her advice to future creators almost seems like a letter to her younger self. “Start with what you find interesting. Try not to compare. I think it's always better to direct your focus inwards and explore and seek what you are passionate about. That's where the interesting things start happening.”

This article was created in partnership with Loop and Ableton read their Q&A here.