Composer Magazine: We're super excited to ask you both about your work on Netflix's Ozark, but before we begin it would be great to know about both of your musical journeys?

Saunder Jurriaans: I started playing guitar when I was 10 years old in Seattle WA, my hero was (and still is) Jimmy Page. I was always more interested in writing and recording music than playing other people’s music.

I had a Tascam cassette four track and used to layer instruments for days - making weird one-man band songs. I had some private guitar lessons throughout the years and otherwise just taught myself. Later, I bounced around between visual arts and music a bunch and found myself dropped out of art school and living in Rhode Island and that’s where I met Danny who was up in Boston. Since we started scoring films I really started branching away from the guitar - learning to play the piano properly and tinkering around with clarinets and any other instruments I could get my hands on!

Danny Bensi: I started playing the cello in the UK when I was around 8 years old. There was certainly a lot of music in my house growing up - with 2 older brothers playing instruments also. The music education system is formidable over there and I was lucky enough to be playing Classical music in orchestras and singing in choirs at a very early age. I moved to Frankfurt, Germany for middle school and Rome, Italy for high school.

I kept up with the cello and my musical education, but also started playing the drums in the school band. They had a huge shiny Ludwig kit & piano that I would play during lunch break (I loved rock and metal). I managed to get into Northwestern University where I got my degree in music and studied the cello intensively. I am extremely lucky to have been exposed to different countries, cultures, people, and musical styles throughout my life - and think it contributes a lot to our film scoring.

CM: You both met in 1997 and toured together in your band called Priestbird. What instruments did you both play and what was the style of music?

Saunder: Priestbird was a 'post-rock-psych-folk-prog-new' music band (super easy to describe as you can tell). We toured with a variety of bands including Medeski Martin and Wood, Rasputina, The Sword, Pelican, Devendra Banhart, Cocorosie and even opened a few shows for Pearl Jam!

Danny was primarily on cello and piano, and I played a double neck bass/guitar. However, we would often jump around and grab each other’s instruments on stage to cover whatever weird arrangement we were playing. Sometimes Danny would be on bass guitar, occasionally I would grab the cello while Danny fiddled on a violin, and Greg Rogove, who was primarily on drums would hop over to the piano or be tapping on a glockenspiel. There was a lot of sample and effects pedal tap-dancing going on as well.

CM: Can you both share what music you enjoy listening to when you're not working on your own? Are there any artists or bands that have influenced you?

Saunder: Lately I’ve been listening to a lot of Thelonius Monk. I’ve never been a huge jazz guy but for some reason he’s got me totally hooked.

As far as influences, I grew up on classic rock and heavy metal so there’s a little Megadeth, Zeppelin and Iron Maiden present in everything I write. Other influential music: Shostakovich stringquartets, Ligeti and Penderecki, the piano music of Emahoy Tsegué-Maryam Guébrou, Jonny Greenwood, Arvo Pärt,Per Nørgard, anything Mike Patton… There’s really so much once I get thinking about it, would be impossible to list!

Danny: I listen to a lot of Classical music (the list of composers/styles is fairly long)! I love comparing performances of the same piece be it a soloist, conductor, or orchestra. Since it’s all so readily available online, it’s kind of easy to do. I also find myself listening to the usual suspect great film scorers of our time and also love to throw on some Queens of The Stone Age whenever.

When we started Ozark, our friend Matteah Baim went out and grabbed field recordings of all sorts of junk, from metal pipes to soda bottles and garbage cans.

CM: Was composing to picture always something that you both wanted to explore in the early days?

Saunder: Not really! I really wanted to be a rock guitar player! Maybe I still do.

Danny: No, I mean I was always fascinated and listening to the music in films, but never thought I could do it!

Saunder & Danny: Both us have pretty simple recording setups - Pro Tools Ultimate, API Lunchbox with some API mic pres. We both use old Neumann KM 86i’s as our main recording mics. Other than that, it’s all about our instrument collections. 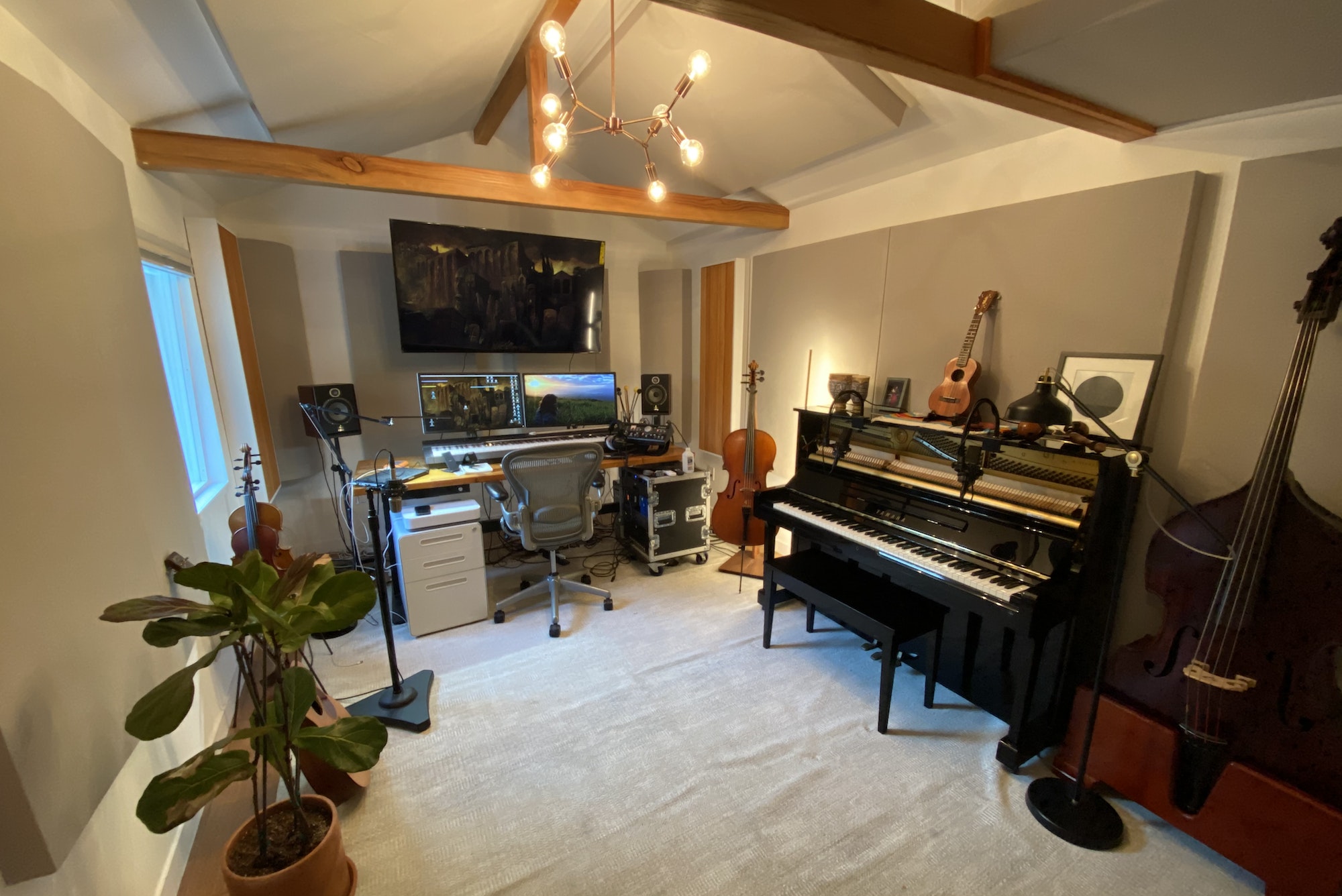 CM: With the release of the new season of Ozark, it would be great to hear how you both ended up working on the series. Did you have to pitch, for example?

Saunder & Danny: We had crossed paths with Jason Bateman a few times - first through another film we scored that he was a fan of called The One I Love, and then on Joel Edgerton’s The Gift. At the premiere for The Gift Jason told us “Guys, I have the perfect project for you,” and that was Ozark.

CM: When you began working on the show, how did you approach creating the initial sounds for the score?

Saunder & Danny: Before the show even started shooting we had been talking with Jason about the tone and mood of the show. The majestic natural landscape juxtaposed with the gritty dark, trashy humanity was an immediate inspiration, and the relentless anxiety. During the initial filming, they sent us dailies so we could immerse ourselves in that wonderful world from really early on!

CM: Can you share what instruments feature in the score?

Saunder & Danny: We created instruments out of everyday materials: metal, glass and plastic that served as the heartbeat of the show, along with our more traditional percussive instruments. Analog synths play a huge part in the score as well, we all have different types. Chase Deso, who works with us is a mad synth scientist and is continually adding wonderfully grimy textures to the palette, typically using his Moog Modular or Buchla's.

As far as software instruments, we use the Spitfire Euphone quite a lot! There are plenty of live recorded deep cellos and basses, as well as some clarinet and bass clarinets. Everything is soaked thoroughly with distortion and various effects, so usually it’s hard to make out what the sound started as. Occasionally a pristine piano will peak its head out for one of the rare emotional moments of the show! 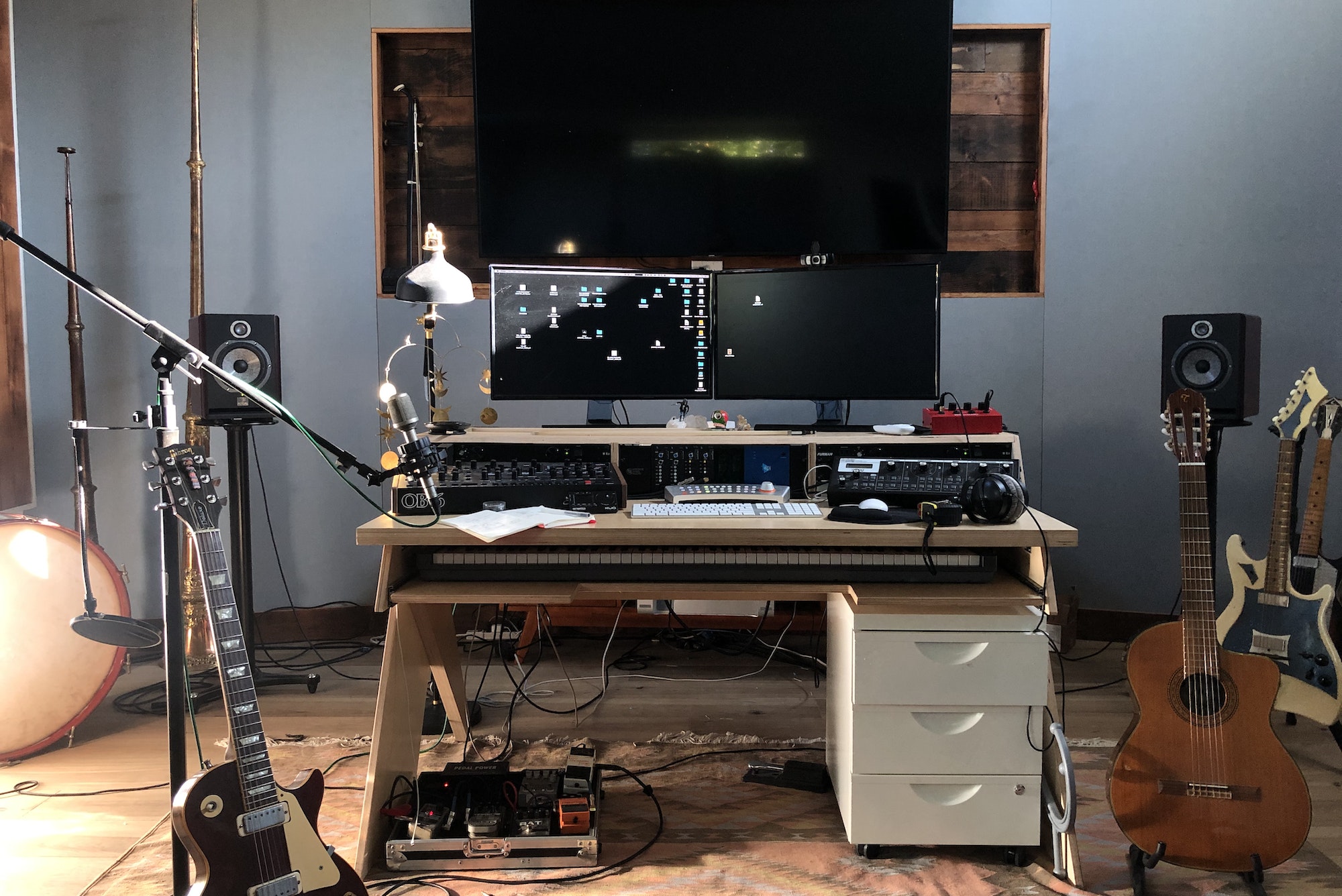 CM: Throughout the show, you are constantly on the edge of your seat with anticipation. How do you go about building the tension with the sounds you've chosen?

Saunder & Danny: We believe less is more when trying to achieve that relentless sense of dread and anxiety. It’s more about repetition and having one or two instruments really grating on your nerves subliminally.

Analog synths play a huge part in the score as well. Chase Deso, who works with us is a mad synth scientist and is continually adding wonderfully grimy textures to the palette.

CM: The percussive elements and textures are something that really stand out in the score. Can you share what instruments and sounds went into making these?

Saunder & Danny: When we started Ozark, our friend Matteah Baim went out and grabbed field recordings of all sorts of junk, from metal pipes to soda bottles and garbage cans. She recorded a wide array of hits and velocities. Those sounds were cut up and we created a big Battery instrument out of them. All the samples are super playable due to the variety of hits she recorded. Mixed in with that is a wide array of live percussion, which gets filtered and blown up in different ways, and then plenty of instruments used as percussion that are NOT traditionally percussion instruments!

What’s super important in the score is the simplicity of the percussive parts, we try not to ever get complex or groovy with the rhythms – it’s more about mesmerizing, primal pounding.

CM: Is there any particular gear or software that you both used to add additional effects?

Saunder & Danny: Lots of Devil-Loc (Soundtoys)! We recently got an Overstayer Stereo Voltage Control, which has a lot in common with Devil-Loc. It’s an amazing and noisy beast. Also, very little reverb! We tried to keep most of the percussion as dry as possible.

CM: How do you approach incorporating orchestral instruments to the score? Did you manipulate them at all to keep them in line with the gritty Ozark soundscape?

Saunder & Danny: All the strings and woodwinds are recorded live by us. We layer them, but never go too big. Then we’ll usually blow them out with distortion either with the Devil-Loc or the Overstayer SVC. We also pluck or strike strings with a mallet to get a more percussive sound. In general, we’re big fans of just grabbing whatever’s lying around the studio and hitting it with a stick or mallet.

CM: Were there any particular scenes in previous seasons that stuck out to you when writing the music?

Saunder & Danny: There are so many, but a few memorable ones from season 1: the money scenes where Marty is pulling everything from the bank in episode 1, Wendy’s lover falling to his death, the whole sequence on the boat where Ruth electrocutes Russ Langmore! 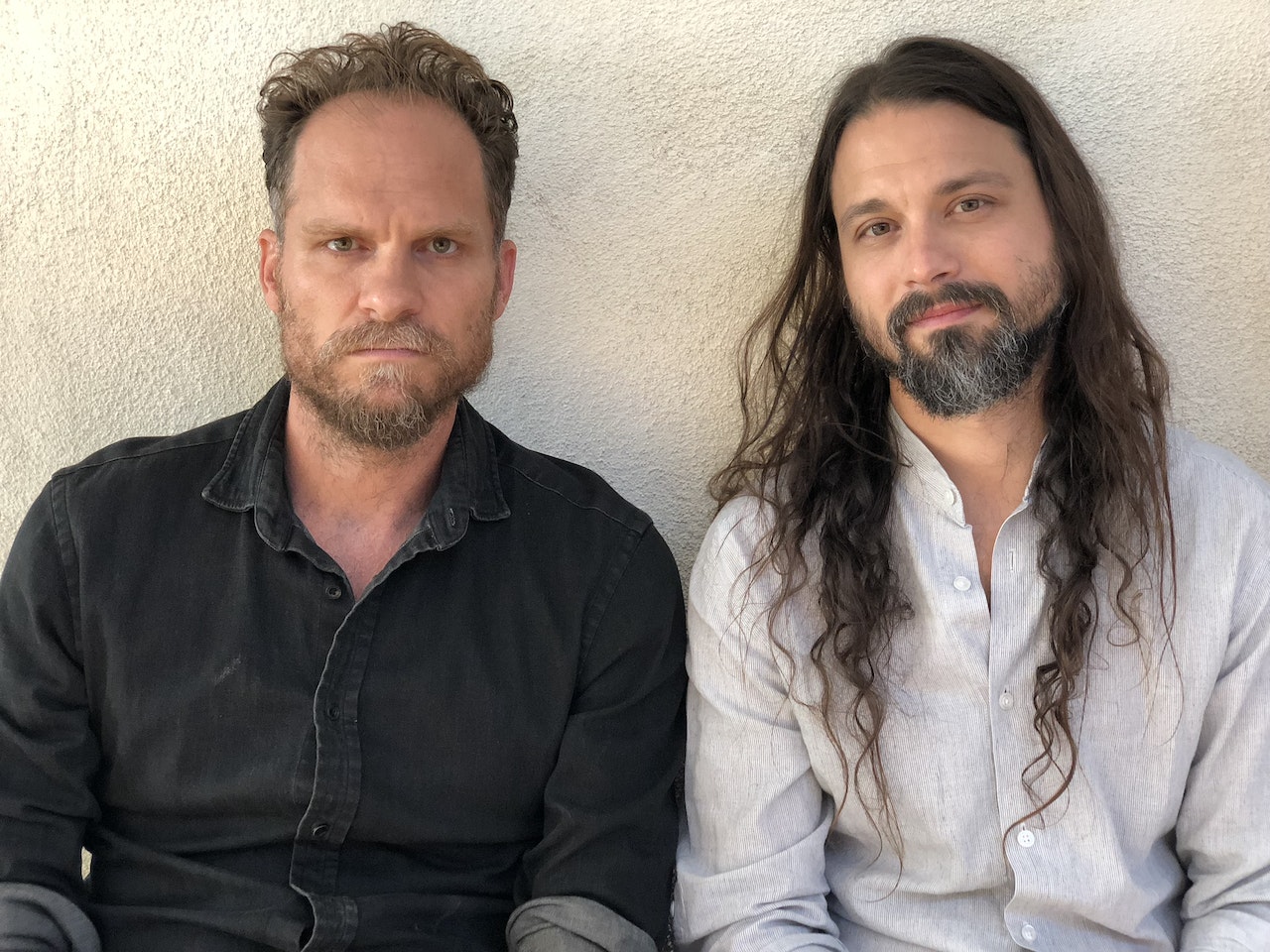 CM: For season 3, what can we expect to hear from you both regarding the score?

Saunder & Danny: Though we haven’t strayed too far from the formula, there are a lot of subtle new sounds going on in S3. Some great new themes for new characters—and some pretty deep, emotional stuff towards the end of the season.