Tina Guo was living in a garage in Los Angeles and on the verge of quitting the electric cello when she decided to plough her entire life savings into a music video. She had spent years perfecting how to play the instrument to sound like a guitar. “It was my goodbye gift to myself,” she says. “I was willing to put everything into it because I'd already given up almost.” It would be her last hurrah before she found herself a steady job in an orchestra.

When Queen Bee was released on YouTube in 2009, it changed the 35-year-old’s life. Her industrial metal take on Nikolai Rimsky-Korsakov’s Flight of the Bumblebee was a ferocious statement of intent, the Shanghai-born musician wielding her electric cello with the aggressive poise of a rock star. A mutual friend showed the video to legendary composer Hans Zimmer who was so impressed that he got in touch to ask her to contribute to the Sherlock Holmes soundtrack. It was the start of a long friendship and prolific collaboration.

“I'd heard his music in movies, but I didn't know who he was,” she says from her home in Las Vegas. “My goal at the time was to play metal. I wanted to do metal festivals. My focus was not on working in soundtrack music.” But Zimmer wasn’t the only composer intrigued by Guo’s talents after watching Queen Bee - John Debney and Brian Tyler also reached out. They each introduced her to the world of film scoring, one which she soon became fascinated with. “Because it’s genreless. On-screen, there is no limit with what type of music you have to do.”

Guo and Zimmer have since gone on to work on many other projects together including Inception, Batman v Superman: Dawn of Justice, Wonder Woman, The Lion King, and Dunkirk. “He's been a huge part of my musical life, a mentor and a great friend. I love the fact that he allows everyone that he works with to truly be themselves. There's a lot of freedom and creativity. Sometimes, he's like: ‘Just do whatever.’ Some composers that I work with have a very specific idea of how they want me to play something so I put myself into technician mode.”

Guo, who moved to the US when she was five, was forced to learn the cello as a child. Her father was a cellist while her mother was a violinist. “I didn't have a choice. I practiced eight hours a day, every day. Growing up, I was miserable. But looking back, I am grateful for it. Because you cannot replicate that number of hours of doing anything. You really build muscle memory. It becomes part of your being, like walking.”

I practiced eight hours a day, every day. Growing up, I was miserable. But looking back, I am grateful for it.

Despite growing up in a conservative family where only classical music was allowed in the house, Guo managed to smuggle in albums by Marilyn Manson, Guns N' Roses, and Daft Punk. She was instantly hooked by the powerful riffs. “What they had in common was very heavy guitar music. I remember thinking: ‘I wish I played guitar.’ Playing electric cello was me living out my old fantasies of playing metal or heavier styles of music.”

It was as a student at USC Thornton School of Music, studying the cello on a scholarship, that Guo learned how to play the instrument so it sounded like a guitar. She diligently studied tutorials on YouTube and experimented with different techniques. “For at least four or five years, my electric cello playing was terrible,” she says. “But I experimented with different amplifiers, different effects pedals. I had no money so the stuff I could afford was terrible. But just to learn how to play standing up, all of this stuff was really by trial and error. I liked the fact that there is no school for electric cello.”

Her efforts have paid off handsomely. Guo is a groundbreaking virtuoso (she also plays the erhu), who has been nominated for a Grammy and Classic Brit Award. She has worked tirelessly to build her business, Guo Industries, and credits joining social media at the right time for helping to turbocharge her success. “So much of my career was built on Facebook and Instagram. When I went to college, YouTube had just come out, Facebook had just come out. I was lucky. Now it is more difficult because of oversaturation. It's beautiful that it's easy to access and it's free. It's an incredible marketing tool. Anyone can share their music in five seconds.”

Guo also made sure she was financially savvy as well. While on Cirque Du Soleil's Michael Jackson: The Immortal World Tour, she was being paid $3500 a week but stuck to a budget of just $20 a week. She was determined to get rid of her student loans and build up some savings. “I was known as the boring person who never did anything,” she laughs. “I was taking these courses online and that's when I started investing after I paid off all my debt. When I left the tour, I came back with a pretty good nest egg.” She offers finance tutorials on her YouTube channel along with her music. 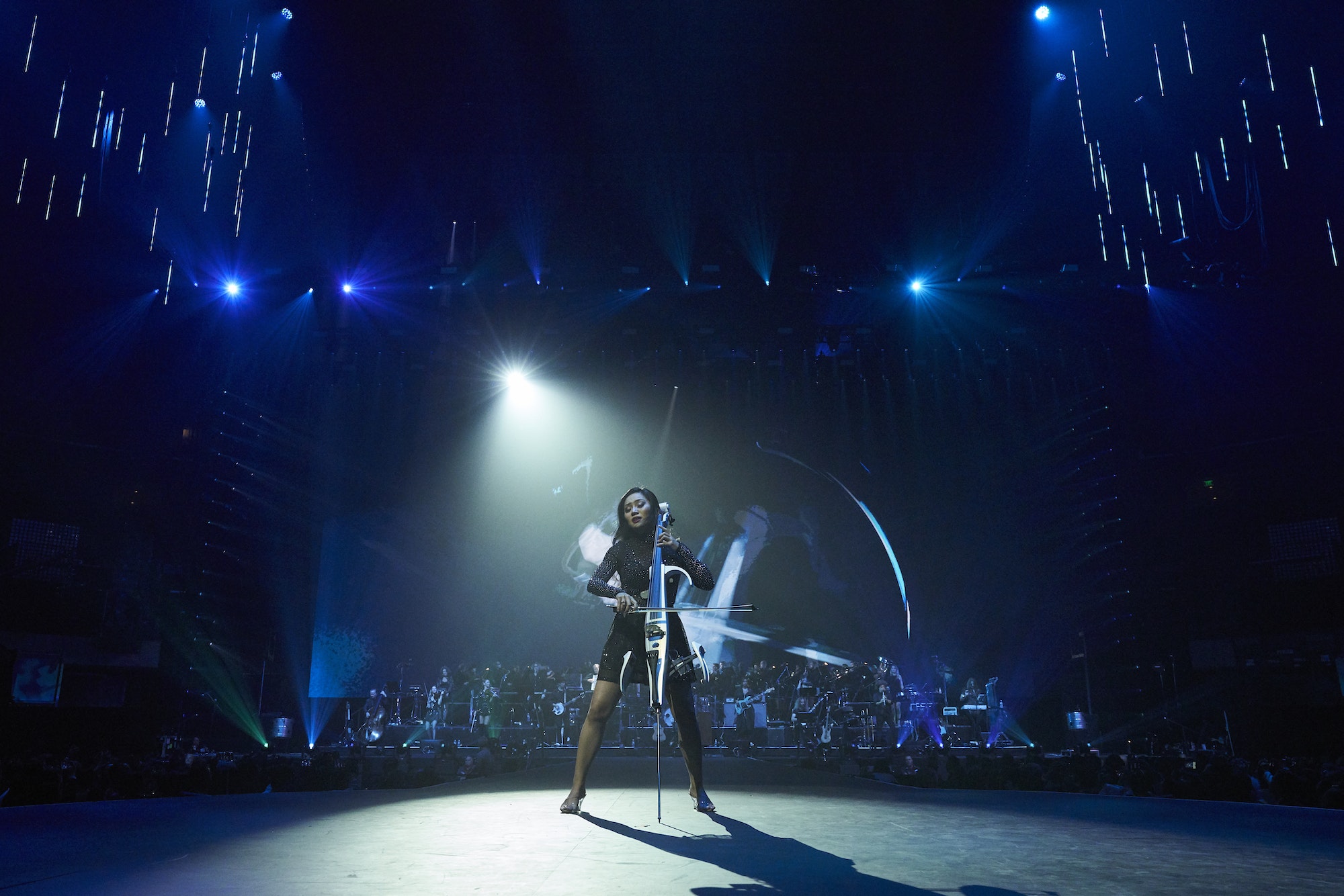 The musician switches effortlessly between classical and electric cello. Guo has performed at the Grammys twice - once with the Foo Fighters and another time with Skrillex, Diplo, and Justin Bieber. She has also played with Alicia Keys, Pharrell, Katy Perry, Stevie Wonder, Ariana Grande, and countless other huge stars.

Beyond her work with Zimmer, she’s appeared on many other TV, film, and video game soundtracks including X-Men: First Class, Olympus Has Fallen, His Dark Materials, Cyberpunk 2077, and Assassin's Creed Syndicate. Guo recently finished scoring Around Robin, a thriller that is currently in post-production. She has also teamed up with Frank Klepacki to compose music for licensing as Dark Dynasty. The duo released their first album GESICHTSSCHMELZER, which means face melter in German, last December.

The cellist has been canny about creating new revenues through her music. She has an online shop Tina Guo Strings, which sells her own music instrument line, and has created a popular sample library with Cinesamples. “At first, I was a bit like: ‘What if I don't get hired anymore?’ But no matter how good the quality of the samples is, you can still tell that it's not a real person. It's like a robot version of you. Every time somebody buys a sample, I don't have to work hour by hour to get a percentage of that so it's worked out great. I feel like a lot of people who didn't know who I was have approached me because of the sample library.”

Once you're in a studio, and you have to play your instrument, no cute photos, videos or outfits are going to save you.

Guo has always relied on herself. She doesn’t have a manager or agent, preferring to handle the business aspects of her own career. Before she signed a four-album deal with Sony Masterworks, she painstakingly taught herself how to produce her eight solo albums, which were released on her own label. She didn’t have the funds to hire an engineer or rent out a studio. “I started on my laptop and I didn't even have a microphone. I learned how to engineer, how to mix, edit stuff, how to master things. I would ask friends for advice. I really felt like I didn't know what I was doing. I’m like: ‘You fake it till you make it.’ Then you suddenly wake up one day, you're like: ‘I guess I kind of know what I'm doing.’

“Honestly, I didn't ever think I would be signed to a major label. I'm like: ‘That's so unrealistic, whatever, I play the cello. I'm not going to be crazy to even think about that.’ It was already crazy enough to want to play metal cello. Let me not push it. I just kept putting out music because I love it.”

Her second album for Sony Masterworks, DIES IRAE (Day of Wrath in Latin), is coming out later this year. The LP will feature 13 tracks spanning classical, electronic, ambient, and metal. It also features a special guest appearance by System of a Down frontman Serj Tankian. “The album conceptually is set in the year 3000 so I just tried to imagine what classical music would have turned into at that time.”

The cellist has also been busy contributing to the soundtracks for Dune and Top Gun: Maverick, two of this year’s biggest blockbuster releases. Both will be scored by Zimmer with Harold Faltermeyer co-composing with him on the latter. “Dune is crazy,” says Guo. “It's a very different sonic atmosphere to match the environment of the film. There was a lot of experimentation, a lot of electric cello stuff, amazing musicians that Hans put together. Top Gun was a little bit more traditional because it was fully orchestrated. There were a lot of melodies from the first movie that appeared." She has also recently finished recording the soundtrack for the new Tomb Raider Reloaded video game.

Guo is incredibly successful but as a woman in a male-dominated industry, she’s found herself in uncomfortable situations. “Have I experienced sexism or someone doing something that would be inappropriate in an HR environment if there was one? Yeah. But I've always been like: ‘No, I'm not okay with this. I only want a professional relationship.’”

Dune is Crazy. It's a very different sonic atmosphere to match the environment of the film. There was a lot of experimentation.

She’s keen to point out how her gender has helped her career instead of hindered it. “I feel like I've gotten advantages because I'm a woman, not the opposite. Using my sex appeal and the way that I look has been a benefit." Women's empowerment is something Guo believes in passionately. "But sometimes people will say: ‘Oh, we have it so hard.’ I'm like: ‘What are you talking about?’ We have so many gigs that we get only because we're attractive females or a certain race. Certain TV shows, gigs, or whatnot with certain artists are very specific about what they want, not how you play, but what you look like.”

While the musician has embraced her image, she claims not everyone has approved. “When I first started out, I would wear whatever I wanted, which was usually not very much clothing. I was doing my thing. Sometimes people would assume - and that's men and women - like: ‘Oh, she can't really play.’ But in the end, once you're in a studio, and you have to play your instrument, no cute photos, videos or outfits are going to save you.”

Ultimately, Guo has her eye on longevity and sees composing as an essential part of a career that is built to last. “I don't think I want to be romping around the stage half-naked when I'm 60!” she laughs. “I don't feel like the metal cello will work at that age, you know? Working in the studio, composing music, that's something that is long term, that can be sustainable after your body's no longer windmilling and headbanging on stage.”