“Honestly, I wanted people to cry when they first heard it, that was really my goal,” laughs Nick Zinner.

It’s 1 am in LA and Nick, guitarist of Grammy-nominated rockers the Yeah Yeah Yeahs, is at home delving into the creative stirrings behind his 41 Strings project. This ambitious orchestral composition, split across four movements, is due for an official release for the first time - and when it does land, will come as something of a departure for fans of Nick’s iconic guitar band.

“I didn’t know what I was going to write or what it was going to sound like,” he explains on the initial musical sketches. “I wanted something simple that contained bombast as well as being highly emotional. It was all about the music being really powerful.”

Originally commissioned for Earth Day, an annual celebration of the environmental movement, back in 2011, ‘41 Strings’ consists of four parts corresponding to the seasons. With 41 musicians involved in each performance, it’s given Nick the opportunity to connect with a litany of top talent including Patti Smith guitarist Lenny Kaye and Interpol’s Paul Banks. Having previously never written anything like this, when the project landed Nick was faced with a starkly blank canvas.

“They wanted to have strings as the conceptual beginning for the whole performance and event,” he says. “And I asked myself, what do I do? Turns out, you can do anything you want. It was a unique opportunity and a really exciting new challenge.”

My favourite saying when it comes to making music is ‘no risk, no reward’.

Nick is well-known for the punk squall of his guitar playing. It’s lacerated the hearts and minds of generations of music fans via the indie rock of the Yeah Yeah Yeahs and acclaimed records such as Fever to Tell and Mosquito. For those who know him as the guitar slinger alongside frontwoman Karen O and drummer Brian Chase, this move into composition is an intriguing one.

“It was actually a commission in New York from this sustainable clothing company, Loomstate,” Nick explains. “They used to put on these events for Earth Day and some friends of mine were involved with them. The previous year, on the 40th anniversary, they did an event called 40 Drummers, and wanted to continue the theme.”

On being asked to create this piece, Nick initially reached out to Hisham Bharoocha and Ben Vida, musicians who had both written and been involved in the previous year’s work. Before, Hisham had released experimental music with the likes of Lightning Bolt, Black Dice and the Boredoms. “Hisham explained how he had tackled this project by dividing it into four sections and I thought I’d try a similar approach,” says Nick. “I had this jam session with Hisham and Ben and came up with a few ideas. Then it was like, ‘all right, I’m going to work’ and that’s how it started.”

Without any previous experience of working in classical composition, Nick’s approach was to break the piece down, and then try and focus on keeping the music as simple as possible. “I didn’t have a vast knowledge of the makeup of the orchestral players,” he says. “I just knew that I wanted lots of guitars, then two basses and started to put the music together from there.”

Much of the composition was written in a studio Nick had next to his apartment on the Bowery where he lived in New York at the time. He locked himself away for a month to craft, refine and edit the music. “I just wrote everything on Logic,” he states. “I wasn’t using the best-sounding plug-ins but it did the trick.” Once the nuts and bolts of the pieces were completed, he took it to orchestrator Gillian Rivers who helped put his music through a final polishing stage. “All ideas start small and it was a matter of taking something simple and repetitive, then building it up,” Nick says. “I learned about the process as I went through it. Then Gillian’s magnificent work took it to the final goal.”

I like to avoid being too self-conscious or being thrown off by what I’m doing. Self-criticism is my worst enemy.

At the heart of 41 Strings are lines of sonic tension, often with Nick and the various players and collaborators as well as between the environment around him and the music. Although his writing has brought two ostensibly jarring worlds together, Nick wanted to look past any boundaries of style or musical conventions.

“I try to not think too much about things when I’m in the middle of writing or creating,” he says. “I like to avoid being too self-conscious or being thrown off by what I’m doing. Self-criticism is my own worst enemy. I aim to get lost in that beautiful, rare creative space where you’re just working and creating and not thinking or judging.” 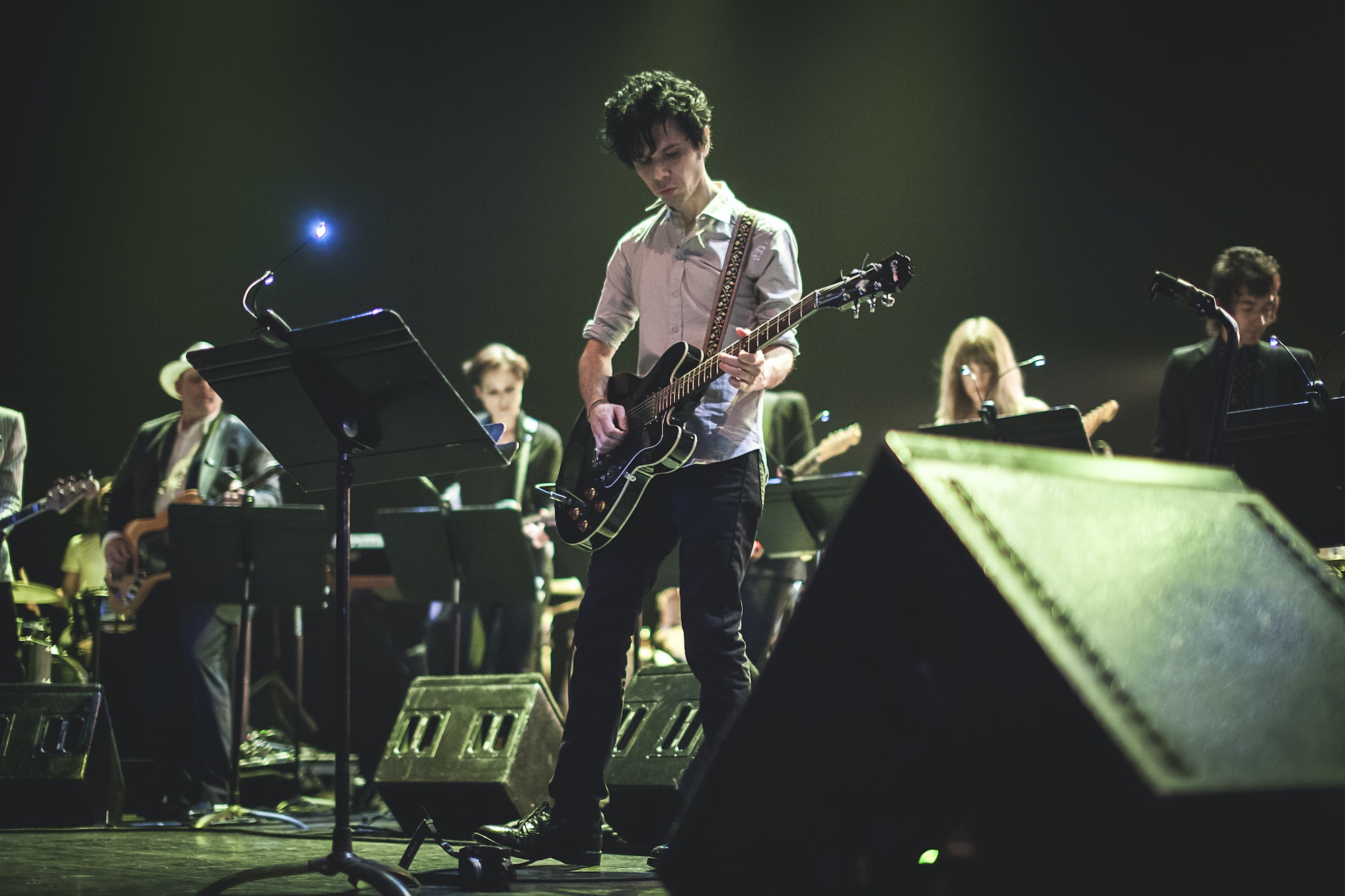 Citing composers such as Steve Reich as key influences, the music hinges around a two-note guitar motif. Once this was discovered, then the rest of the composition’s musical architecture was elevated around it. For Nick, there was some contemplation prior to writing and a departure from the way he works with the Yeah Yeah Yeahs. “This was the first time I ever consciously considered the natural world as an inspiration,” he says. “Usually, whenever I write with the band or Karen, it’s more like in the moment and we don’t have anything pre-planned in mind.”

With 41 Strings, Nick allowed himself the opportunity to reflect on how the seasons made him feel, especially when residing in New York at the time he wrote it. “Living in the city back then, you’d spend half the year battling the elements and it just controls everything,” he says. “I invested time in really trying to imagine what I’m like during the beginning of a new season and all the emotions this creates.”

While it’s unlikely that the Yeah Yeah Yeahs are suddenly going to release a wholly classical piece, his experiences have certainly bled into different areas of Nick’s musical practice. “It’s definitely influenced things a little,” he says. “Whether it’s the acoustical sound of strings or having an orchestra - just in terms of, arranging and harmonies and dynamics, texture - in those terms it’s been influential. Then I’ve since worked on some scores, so it’s been a bit of a training ground for me.”

While the piece has stretched his skills, each performance has had slightly different dynamics, in part fed by the new cast of musicians involved. Over the four occasions 41 Strings’has been aired, the lineup always consists of three drummers, one bassist and a keyboardist - but then paired with different guitarists including Sarah Lipstate (Noveller, Iggy Pop), Paul Banks (Interpol), Gemma Thompson (Savages), Aku Orraca-Tetteh (Dragons of Zynth).

“With the guitar players, I spent time researching and finding people who might be into it,” Nick says. “We’ve been so incredibly lucky. A big consideration is attitude and vibe, having people who are going to be cool being around 50 odd musicians. Each one is unique due to the players and the setting - it’s unreal in that respect.”

Part of the appeal of the performance has been the gang Nick assimilates for each run-through. Open-mindedness as well as an ability to play beyond ego is clearly a key part in selecting his collaborators. “People are always happy to hang out and meet each other,” he says. “Despite how many stars and famous folk have been involved, it’s always been lots of fun for us and the audience as well, to see this crazy collection of performers.”

I didn’t have a vast knowledge of the breakdown of the orchestral players. I just knew that I wanted lots of guitars.

The new release of ‘41 Strings’ is a studio recording captured after the first New York performance. There are other versions floating around the internet, which has been part of the motivation to commit and put a release in stone via Yeah Yeah Yeahs’ Brian Chase’s Chaikin Records’ label. With the support of Vice Magazine and their Creators Project, Nick was able to hire a studio at short notice and record it.

“They put up a content piece and we had the mp3s up there, it lived there for a while, then I noticed that it found its way onto YouTube, but I always felt it deserved a proper release,” he says. “Unfortunately, the drive that had the original recording got lost and we just had these Wav files,” Nick continues. “I really wanted them to be remastered so my friend Chris Coady is a great mixing engineer and he remastered them. We wanted to have it out for the 10th anniversary of the project, but you know, pandemic.”

With this project due for release and the Yeah Yeah Yeahs gearing up for more touring and new music in the form of ‘Cool it Down’ later this year, Nick’s musical life is set on becoming even more exciting as 2022 unfurls.

“My favourite saying when it comes to making music is ‘no risk, no reward’,” he laughs. “Trusting your instincts is so important too - and I continually have to remind myself to follow both pieces of advice.”