On a trip home to Kenya for a family wedding in December 2019, composer Nyokabi Kariũki woke up early, went down to the white sands of Galu beach, and sat in the water. As the waves lapped the shore around her, she began recording their sound, capturing an aural souvenir of the moment.

It’s that field recording that forms the backbone of the 23-year-old’s new single on SA Recordings, fittingly called Galu. “I just placed it and started looping it and I was like, ‘What does this make me feel when I hear the sounds?’” the composer explains over Zoom from Maryland, where she’s been living with relatives after graduating from New York University last year. “Hearing it over and over just transported me back to that place.”

That scene-shifting power isn’t something that is limited to just its creator’s experience of the track. In its hypnotic, repeated refrain of “I go down at 6 am to swim” invites you along to the shoreline with her, filling in more of the picture with each utterance. “To me, it’s quite interesting to see how I can tell a story or build a world without giving what we would think is enough information,” she says.

The ideas of home – a literal, geographical place, or the culture that you call your own – and exploring new worlds play a big part in ‘Galu’ and Kariũki’s broader work. She was raised playing within the “Western classical idiom”, including 16 years of learning classical piano, but is now on a journey of rediscovering African musical traditions. “There’s just so much I’ve not been able to learn about myself and where I’m from, and my heritage,” she says, citing colonisation and Western culture’s hegemony on the world as barriers to that knowledge. 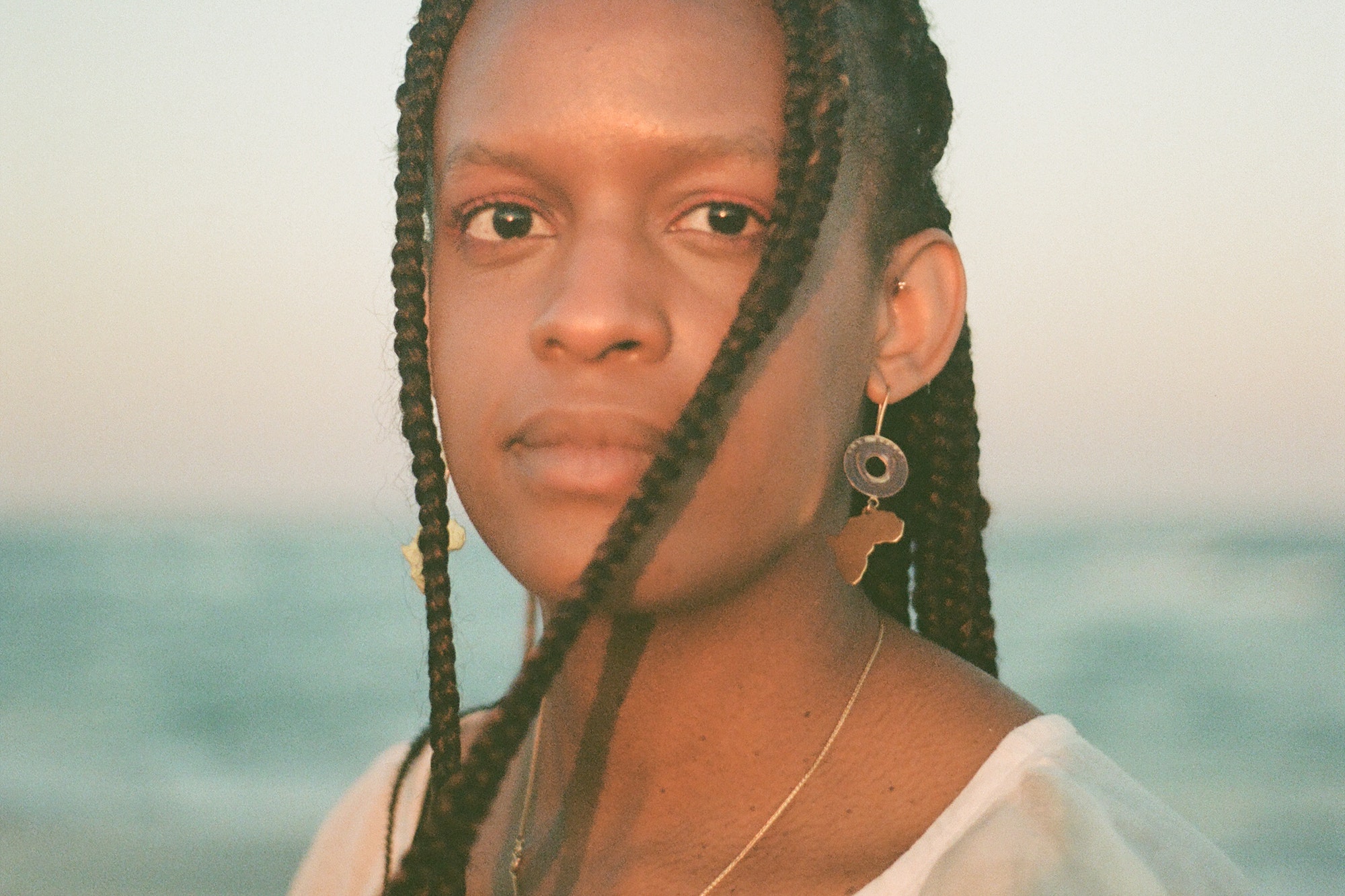 Now, language and music are her tools to opening up that culture to her. She’s started collecting thumb pianos that are known by various names across Africa, including kalimba and mbira, and one features on her SA Recordings Singles Series contribution as one of only four sounds, alongside a drum set, the young musician’s voice, and her field recordings. “They’re fascinating to me – it’s an instrument that you can find in so many different parts of the continent and they have so many unique iterations and tunings,” she explains, her captivation with them clear in her voice.

There’s just so much I’ve not been able to learn about myself and where I’m from, and my heritage.

Rediscovering her heritage is something that’s been on Kariũki’s mind for a while and is something she’s written about often in creative writing pieces. Until recently, though, she wasn’t sure how to work that into her music. Towards the end of her degree, she tried to find African music classes at university but found her options were limited – if the classes didn’t get cancelled completely. Instead, she’s had to educate herself, submerging herself in books on African music traditions and trying to move away from seeing it through a white, Western lens. “A lot of the books I initially found were are written by white men written by white men who were walking through Africa in the 20th Century,” she notes. “But the knowledge already exists within Africa, and it's just meant that I have to put in a little extra work to find that.”

One African composer who has had a big impact on her perspective is Francis Bebey, a Cameroonian musician who was a pioneer in combining the musical traditions of his home with synthesisers and the electronic music he discovered while studying in France. He also wrote what Kariũki terms his “manifesto”, African Music: A People’s Art, which gives a “brushstroke history of African music”. In part of it, he discusses where he thinks the continent’s musicians could be headed in the future.

“For him, it was very much like there are so many tools that we can use in different idioms to enhance and bring out new forms of African music,” the composer says. It’s a notion that helped her in her own work. “There’s always this thing of, ‘Does your music sound African?’” She sighs. “I hate that so much because there’s just so many influences – whether I want them or not – that have just seeped into my expression. To read and see how he did that and how he was still able to own his music was very influential to me.”

Kariũki will take her next step in owning her own combination of influences in her music with an EP, ‘Peace Places: Kenyan Memories’, which Galu features on. Each track is linked by her field recordings of places from her home, like her grandmother’s farm on the enthralling, animal-accompanied journey of ‘A Walk Through My Cūcū’s Farm’, which won the composer the HearSay Art Award 2021. Elsewhere, there are moments captured from Kirinyaga – where her father and seven aunts grew up – and from the piano, she grew up playing. “Every time I go home, there’s just this familiarity that my hands have with those keys that I just cannot explain,” she says, pausing for a moment to catch herself. “I’m tearing up!”

I want people to see that African stories, African music belong in the world’s collective memory.

Making field recordings of the environments she was in is a byproduct of leaving home. When she moved to the States to study music composition at NYU, Kenya “started feeling like this sentimental place, more symbolic” than when she was growing up there. Now when she’s home – a rare opportunity in pandemic times – she feels an urge to “make the most of every single moment”. “I need to absorb everything and sound is a way of preserving the memories,” she explains.

Capturing those sounds is something she does less when she’s in the US but is gradually becoming “more of a thing” for her there too because of how big a part of her work it’s become. During the pandemic, Kariūki started making a sound journal where she recorded the sounds around there at the same time every day. Later, she used those recordings as foundations for music, which eventually formed her senior recital for college.

As a composer very much on the rise (she also won the SA Recordings ‘Recompose’ competition earlier this year and has worked with the likes of the Heartland Marimba Quartet and the Brooklyn Youth Chorus Men’s Ensemble), there are plenty more things in the works for Kariũki. As well as ‘Peace Places: Kenyan Memories’, concert pieces and a marimba quartet, she’s busy crafting another record that's, "pondering on this idea of leaving and how we’ve had to leave in so many different ways from the pandemic,” she says.

What all of those projects are ultimately working towards is the composer’s goal of reframing the world’s perspective on African music. “I want people to see that African stories, African music belong in the world’s collective memory,” she says. “With the sound journal I was telling you about, I asked for recordings from my friends all over the world – for me, all of our stories belong.”