Sergio Ronchetti has learned to lean into the things that make him unique. It’s a lesson learned from childhood. As a first-generation child growing up in Britain with Italian and Spanish parents, the composer and sound designer grew up with somewhat of an identity crisis. Italian was his first language, Spanish and then English his second and third “It’s the reason I’ve got this janky accent,” Ronchetti tells us over Zoom, downplaying one of the coolest accents we’ve possibly ever heard.

“I didn’t quite know where I fitted in and that was very stressful as both a child and teenager trying to find my way – I only got my British passport a few years ago as an example. But now I embrace it, much as you’re about to find out with my music,” he says, smiling. “I lean into the things that are me.”

Ronchetti’s talking about his love of metal music, and it’s what makes his debut score for Eldest Souls, a pixel-art boss-rush video game inspired by Hidetaka Miyazaki’s Dark Souls series, so special. That’s not to say that the music in Eldest Souls is back-to-back blast beats and heavy guitar chugs. While bands such as Trivium, Machine Head, and Gojira have directly influenced the music in the game, the instrumentation in Eldest Souls is far removed. Instead, Ronchetti leans into the aggression and relentless rhythms of metal music, wrapping dark orchestral strings and heavy percussion around motifs that match the ferocity and unique personalities of the bosses that you encounter in the game.

It’s the perfect fit. As a boss-rush game, Eldest Souls’ monolithic bosses known as the Old Gods are the only enemies you encounter in the game, and like Dark Souls, they’re notoriously difficult. As you slash away at your enemies’ health bar and finally start to feel like you’ve memorised their attack styles after dying hundreds of times, they’ll suddenly change form and force a change of tactics.

As soon as I started playing bass and discovered what distortion was and how to use a pedal, that was it.

As well as being Ronchetti’s first score, Eldest Souls was developed by a team of just two other full-time employees at Fallen Flag Studios. And not only was Ronchetti responsible for all of the music in the game, but as head of audio, he single-handedly created all of the foley, sound effects, and voice-over work for the characters too. Most remarkable of all is that ten years ago, he never imagined a career in video games. Ronchetti wanted to be a rock star.

“I just knew that I wanted to ‘make it,’ whatever that means,” Ronchetti says. “My uncle in Spain was an enormous metalhead and my idol growing up as a teenager. He had every Slayer, Megadeath, Anthrax, Paradise Lost album on vinyl, cassette tapes, CDs… you name it, he had it.”

While Ronchetti’s uncle gave the aspiring rock star his introduction to metal music, it was Metallica and their bassist Cliff Burton that inspired him to pick up the bass guitar. “As soon as I started playing bass and discovered what distortion was and how to use a pedal, that was it. I just wanted to solo and play like Cliff.” 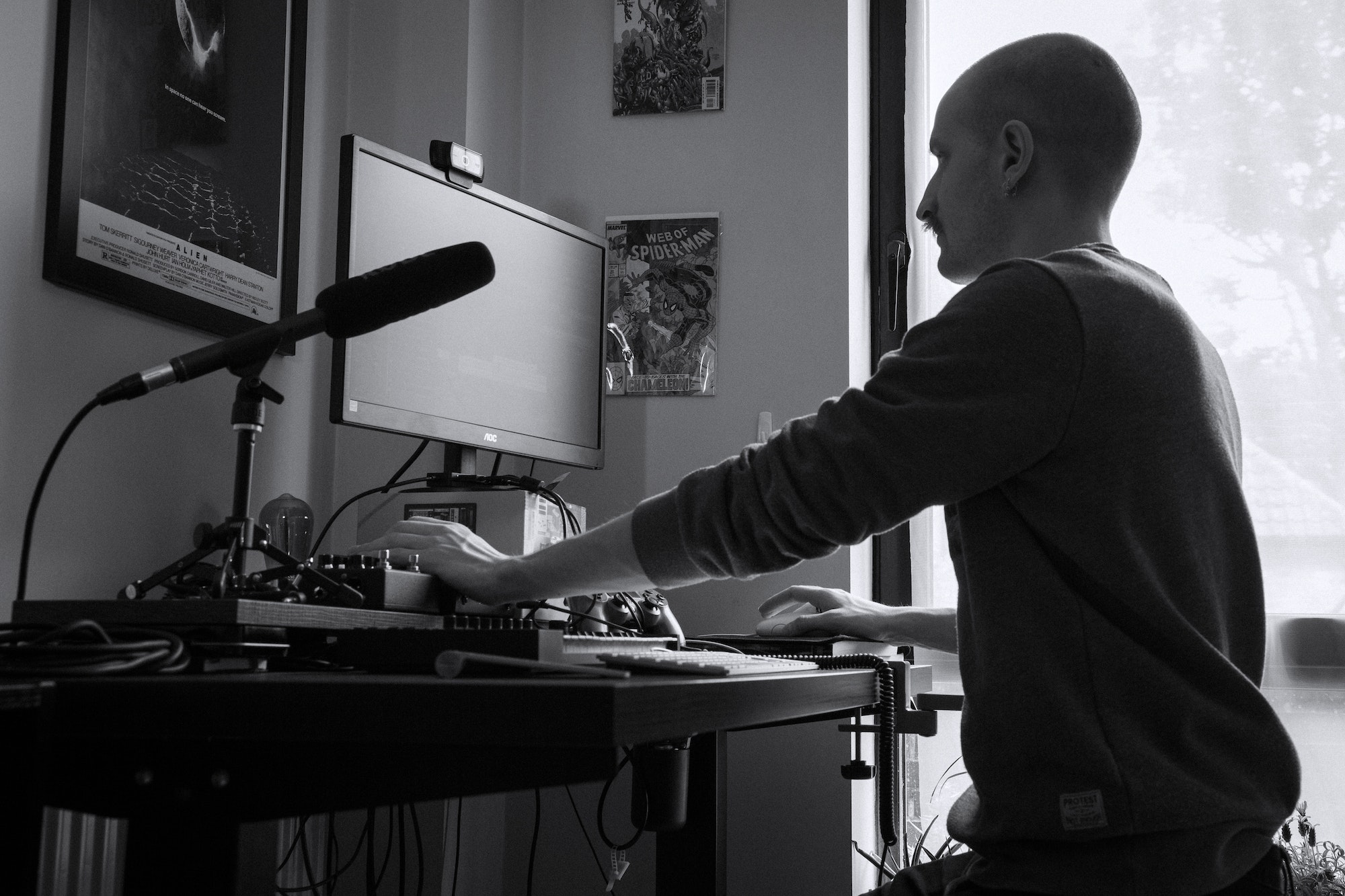 Rock star seems like the natural career path for a kid that went on to spend every spare minute of his lunch breaks at secondary school jamming with friends to the likes of Green Day, Papa Roach, or anything else they could play really quickly. In-between regular band practices, Ronchetti and his friends would stay up all night playing video games playing heavy metal music. “We’d just pick the latest game and try and complete it in one sitting. Anything from the original Metal Gears and Dead Space to the God Of War franchise,” he says.

When his friends left for University, Ronchetti felt that he wasn’t ready for higher education but managed to join a band called Skreamer, with whom he spent the next four years touring and recording music. “They were driven, had the means to do so and it was just kinda perfect,” Ronchetti explains. “I got everything out of that band.”

With a mini studio in the back garden of one of the band members, Sergio learned how to use Logic and developed a lot of other skills that have been vital in his career as a composer and sound designer. But still, at this stage, he had no idea that was what he wanted to do. That lightbulb moment came during a playthrough of the survival-horror game Dead Space.

“I was walking down a hallway [in the game] and just wanted to know why I felt so tense,” he explains. “I started listening more carefully to the music and noticed this ambient violin section that was ascending the whole time and building to a crescendo.”

“I just remember thinking ‘shit, that’s why this game is so scary! It’s the sound! I wonder who did that?’ I think that’s the first time I actually asked myself ‘what is a sound designer?’ It’s a really simple question but one that’s so often underlooked. It started to pique my interest and then I thought about how cool it would be to work on video games as a sound designer.”

Ronchetti eventually left the band to pursue a music degree course at Goldsmiths, University of London, wanting to focus on composition and sound design for film and TV. That changed after he met the master students on the video game course. Ronchetti started teaching himself how to use the FMOD Studio Suite so he could implement adaptive audio into video games, alongside additional courses on film composition, DAWs, mixing, and mastering.

“I knew that what the course was giving me wasn’t enough,” he says. “I always knew that Uni would be a jumping-off point and I’d have to figure a lot of things out on my own. You have to actively seek the thing that you want to do, right?”

I always knew that Uni would be a jumping-off point and I’d have to figure a lot of things out on my own.

It was during his time at University that Ronchetti had a chance to meet with the Eldest Souls creators Jonathan Costantini and Franceso Barsotti. Ronchetti was there because of a VR project he was working on, while Costantini and Barsotti were demoing a playable build of their game. The three of them hit it off. They got chatting, met up afterward and Ronchetti was invited to join the team after nailing an invitation to create music for an upcoming trailer. “I think I was the only person there on that day who managed to beat the demo, too,” he laughs. “To this day, I’m still convinced that’s the main reason we’re working together!” 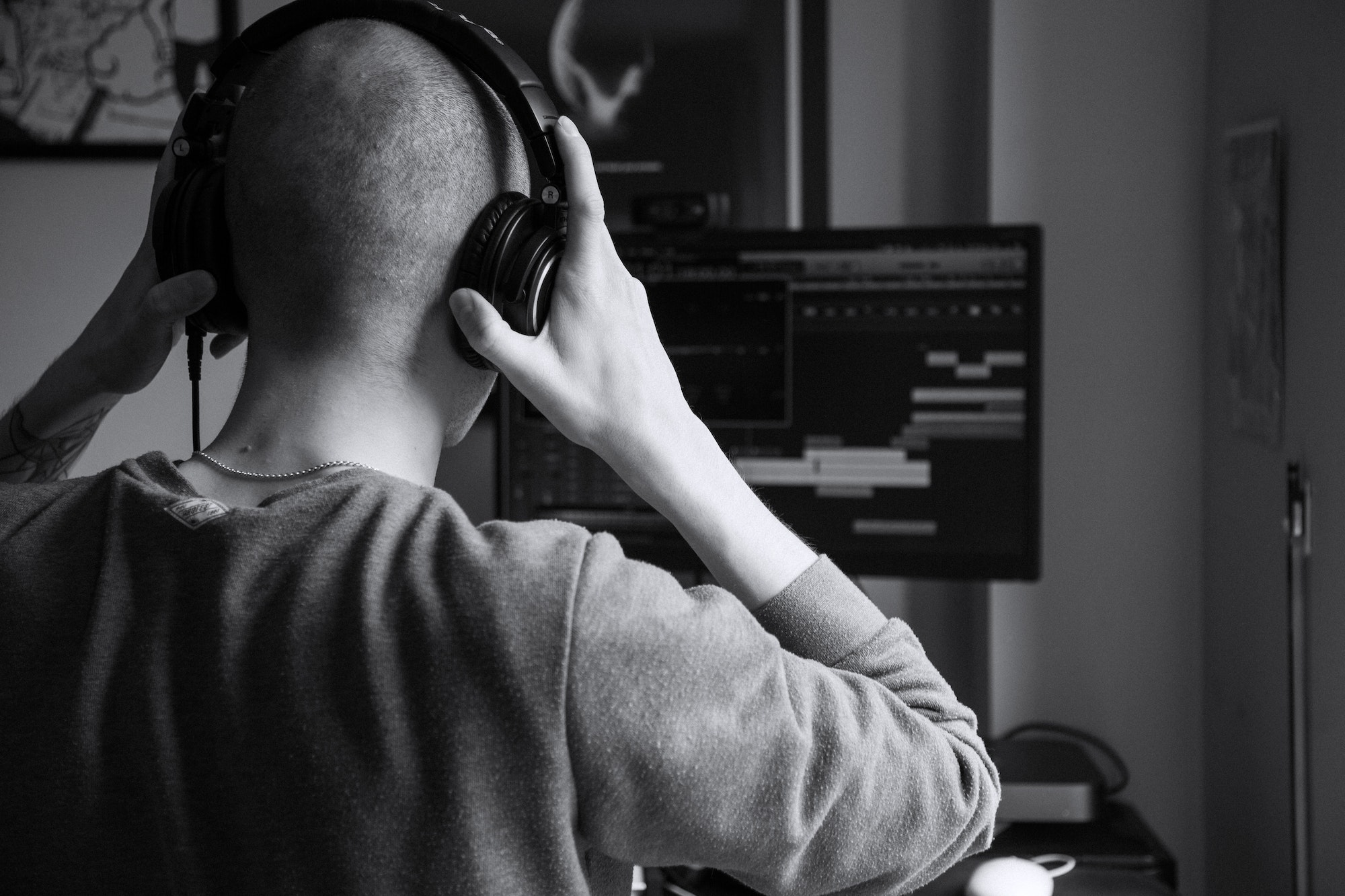 As well as playing the Dark Souls games for inspiration, Ronchetti asked Costantini and Barsotti to give him just three words or phrases to describe the emotion they wanted to evoke with the game’s music. “Everything was about telling a story, no matter how small or possibly insignificant in terms of the overall game. I always wanted to anticipate the player’s reaction and decisions,” Ronchetti explains, who was given the very metal brief of ‘loneliness’ and ‘desolation’ with a ‘glimmer of hope.’

“The music is never going to be as dark as Dark Souls because it didn’t quite fit the format of the pixel-art design, nor the references that they gave me – but it has definite similarities in terms of how aggressive the music is,” Ronchetti says. The aggressive nature of the music is where Ronchetti started leaning into his heavy metal influences.

“The drummer from Gojira is an absolute deity in my eyes and his drumming is such a backbone of their music,” he continues. “Tracks like The Imperator in the game represent the first points where I took metal riffs and rhythms and put them in there. Most people will never hear that because they’re orchestral sounds but that’s why the drums are so prominent in the mixes, as opposed to the way they’re used in Dark Souls, Bloodborne, or God of War, where there’s a lot more space.”

It’s the composer’s job to inform developers and designers what they can do with audio.

As for implementing the game’s adaptive audio, Ronchetti’s previous experience with FMOD alongside hands-on access to the latest playable builds of the game has been invaluable.

“That way I could see what bosses were doing,” he explains. “It’s the composer’s job to inform developers and designers what they can do with audio. I can play and say to the guys, ‘when this phase happens with the boss, how does it work?’ so then I have a better idea of knowing how to loop certain bits of music and which sections I can use as transitions. 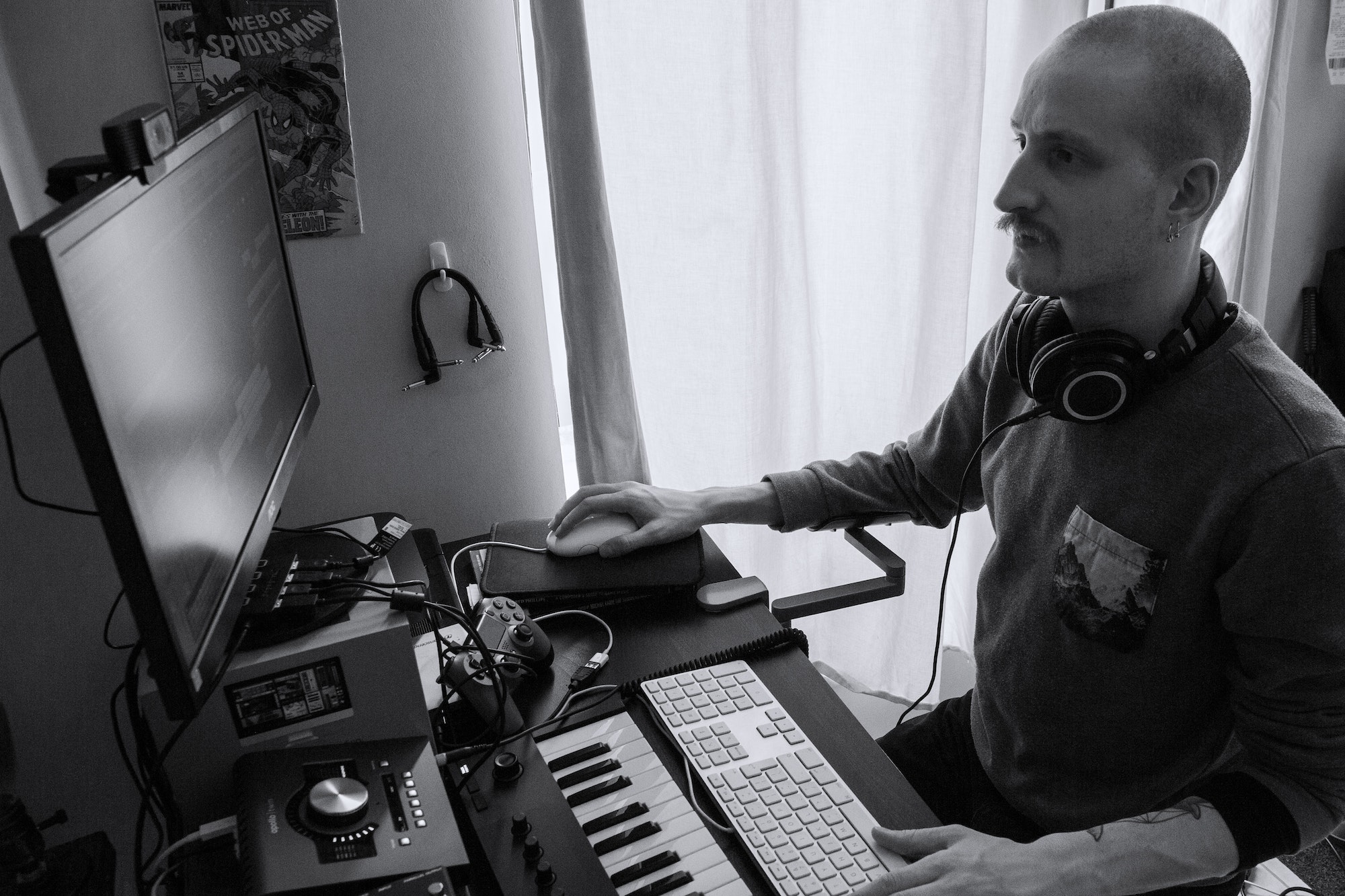 “All of that is really important because it informs the player of where they are in the boss fight, as well as helping them understand the difficulty change when new features are introduced during combat. Sometimes there’s a very obvious visual change. Others it’s more subtle, so I have to communicate that with my music.”

Not all of the music in the game is relentlessly aggressive, though. Away from the boss fights, as you delve deeper into The Citadel, the score is governed by ambience. “That’s the pull of the themes again – the story, the narrative of being alone, and the desolation around you. There wasn’t much room for me to do that Wagnerian leitmotif writing I’d studied three years for, which I’d love to do but it didn’t suit the game and I’d only be forcing it in there,” Ronchetti says.

The main theme of Eldest Souls is also a departure from the game’s unforgiving gameplay, focussing on the feeling of hope with uplifting choral melodies and soothing strings. “It sounds very different to everything else in the score because it’s taken from my other main influences, minimalist composers such as Max Richter and Ólafur Arnalds.”

While Ronchetti listens to film and video game scores in his spare time (Bobby Krlic’s score for Returnal, Bear McCreary’s work on God of War, and Ilan Eshkeri and Shigeru Umebayashi’s work on the Ghost of Tsushima soundtrack are all brought up during our chat) he doesn’t want to fall into the trap of emulating what’s already out there. His Mac desktop background – a quote from video game composer Mick Gordon’s GDC talk – serves as a constant reminder. “Change the process. Change the outcome. If you have the same set-up and try to do the same thing over and over, you’re just gonna get the same result.”

At just 28-years-old, Ronchetti is still in the early days of what promises to be an exciting career. Eldest Souls was released to rave reviews and has already picked up more attention than most indie games of the same size typically would. In his spare time between working on the next project, Ronchetti is using his experience and passion for game audio to help other composers and sound designers step into the world of video games.

*Eldest Souls is developed by Fallen Flag Studios and published by United Label. It’s available to download now on PS5, PS4, Xbox Series X/S, Xbox One, Nintendo Switch, and PC. You can listen to Sergio Ronchetti’s score for the game on Spotify.